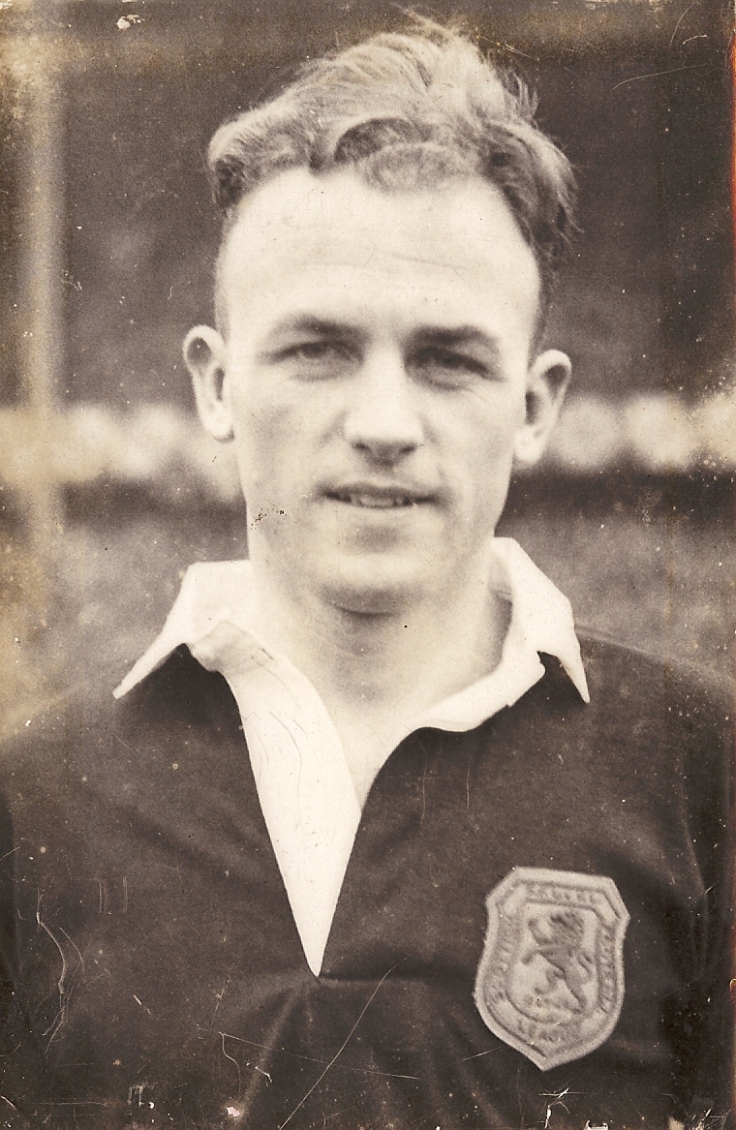 Johnny will turn 91 today. Johnny played on the wing for Partick Thistle in the 1950’s and was known as the ‘Firhill Flyer’. Johnny was capped nine times for Scotland and is the only known Gaelic speaking player to represent Scotland at football. Although born in Denistoun, Glasgow, Johnny’s mother came from Tiree where Johnny now lives, his father was originally from Skye.
Johnny gained his first cap on November 4th, 1953 in a game at Hampden against Wales that doubled up as a Home International and World Cup Qualifier. Also, making his debut and only Scotland appearance was Willie Telfer of St. Mirren. The Scots drew 3-3 with goals from Allan Brown of Blackpool and Hibs Famous Five players Bobby Johnstone and Lawrie Reilly.
Five months later in April, 1954 Johnny faced England at Hampden in front of a crowd of 143,544. Scotland would lose 4-2 with the Scots goals coming from Allan Brown and debutant Hibs legend and future Scotland manager Willie Ormond. However, with Wales losing 2-1 to Northern Ireland a few days before Scotland qualified for 1954 World Cup as runner up in the 1953-54 Home International series.
Johnny’s only goal for Scotland came in a World Cup warm up against Norway in Oslo as the Scots drew one all. A few days later in Helsinki against Finland and Scotland won 2-1 with goals from Hibs duo Bobby Johnstone and Willie Ormond. This was to be the only time Johnny would taste victory in a Scotland shirt.
It’s safe to say that Scotland’s World Cup campaign in Switzerland was a bit of a disaster and most of it was self-inflicted. The SFA had decided that they would only bring thirteen players and have nine on reserve back in Scotland, despite being allotted the usual twenty two. England would only take 17 and South Korea 20 but every other team took the full 22. There was also the issue of Rangers being allowed to tour America at the same time and taking their Scotland regulars with them, thus Scotland were denied the talents of Captain George Young, Sammy Cox and Willie Waddell; all regular starts at the time.
Scotland narrowly lost their first game in Zurich one nil to Austria and the full line-up for our first ever World Cup game was; Fred Martin (Aberdeen), Willie Cunningham (Preston – Captain), Jock Aird (Burnley), Tommy Docherty (Preston), Jimmy Davidson (Partick Thistle), Doug Cowie (Dundee), Johnny MacKenzie (Thistle), Willie Fernie, Neil Mochan (both Celtic), Allan Brown (Blackpool) and Willie Ormond of Hibs.
Their final game was against Uruguay in a very hot Basle, with the Scots playing in heavy winter football strips. Johnny is quoted as saying “Did I play in that game. I certainly didn’t touch the ball that often. It was so hot and our kit was unbearable. I lost about half a stone in weight.” The Scots lost 7-0.
Cap number seven came in December 1954 when the mercurial Hungarians came to town beating Scotland 4-2 in front of a crowd of 113,146. Scotland’s goals came from Bobby Johnstone and Off the Ball legend and Clyde player Tommy Ring. Ferenc Puskas said of Johnny’s performance that he had “never seen wing play of such a high standard”. Praise indeed.
Five months later and Johnny and his Scotland teammates were shell-shocked by a blistering start by England at Wembley that saw the Scots 4-1 down with only 27 minutes played. The game would finish 7-2 with the Scots goals coming from Lawrie Reilly and Tommy Docherty.
Johnny’s last appearance came in May, 1956 in a one each draw with Austria. Hearts’ Alfie Conn (Senior, of course) scored the Scots goal in his only appearance for the national side. Also making his debut that day was Mick Cullen of Luton Town, the only appearance ever by a Luton player for Scotland.
Johnny would go on to play for Partick Thistle for a few seasons yet before moving to Dumbarton in 1960 and finishing up his career at Derry City.
Happy Birthday Johnny and all the best; here’s hoping Scotland celebrate a victory on your day.
David Stuart