Scotland v. the U.S.S.R. – that’s another fixture we’ll never see again – unless Putin’s expansionist plans continue unchecked. Four times we played the Soviets, twice in Glasgow – either side of a game in Moscow and a World Cup Finals match in Malaga and never did we manage to overcome the evil Empire. Where were Han Solo and Luke Skywalker when you needed them?

Despite being in the middle of a cold war we invited them over to Hampden in May 1967 for a friendly match which they duly won 2-0 with the legendary goalie Lev Yashin keeping Law, Lennox and Wallace at bay. Indeed this reverse was despite Scotland calling upon the skills of no less than seven players from Celtic who two weeks later would win the European Cup. [I’m no Celtic fan but I love being able to say that a SCOTTISH team were Champions of Europe. Love it! Love it! Love it!] Anyway, it was interesting to note that all five of the other players utilised were Anglos including skipper Jim Baxter who was at Sunderland at the time. 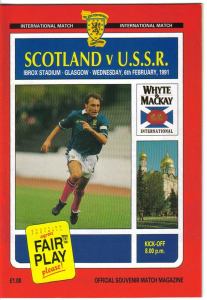 Fast forward to February 1991 when Andrei Kanchelskis and his mates won the friendly international 1-0 at Ibrox Stadium in front of only 20,673. Gordon Strachan who was with Leeds United won his 44th cap that evening whilst another future Scotland manager, Alex McLeish, made his 75th [and 3rd last] appearance for Scotland.

The political map of Europe was changing however and by the time of the European Championship Finals in June 1992 the U.S.S.R. had morphed into the C.I.S. [Commonwealth of Independent States]. It was in Norkopping, Sweden however that Scotland finally put ‘them’ to the sword with an emphatic 3-0 victory which included a goal from Brian ‘Princess Leia’ McClair whilst Chewbacca McAllister even managed to convert a penalty!