Glasgow 800 and the Wombles 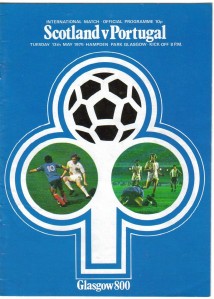 It was forty years ago – on 13th May 1975 to be precise – that the Womblescame to Hampden Park and were sent homeward to think again. A crowd of 34,307 turned up to see Scotland v. Portugal as part of the celebrations commemorating the 800th anniversary of the granting of Glasgow’s burgh charter in 1175. As part of the half-time entertainment the Wombles took part in a penalty kick competition and for the uninitiated, the Wombles were pointy-nosed, furry creatures from a children’s tv programme who collected and recycled rubbish in and around Wimbledon Common in London.Needless to say the Wombles were boo-ed mercilessly but to placate any animal rights activists who may be reading this I’d like to say I have a sneaking suspicion that these six foot plus creatures were in fact just ‘actors’ dressed up in ridiculous looking costumes. I was fifteen at the time and enjoying an illicit affair with Woodpecker cider so I can’t be certain.

The souvenir programme comprised of only twelve pages but it included an eclectic collection of photographs – from what looks like action from the 1974 World Cup Finals on the front cover to snapshots of the aforementioned Wombles, American family music group The Osmonds and Glasgow Lord Provost Sir William Gray. Photos of our football heroes included Spurs striker Alfie Conn complete with King Charles the second shoulder-length hairstyle as well as David Hay and goalkeeper Stewart Kennedy. The history books now show that Hay had played his 27th and final Scotland match against Yugoslavia in Frankfurt the previous summer.Conn had yet to receive his first cap whilst both his and Kennedy’s international career would end in eleven days time following a 5-1 mauling at Wembley.

Back to the Portugal game and a much more acceptable contribution from the English capital was Chelsea’s Charlie Cooke who won his 16th and final Scotland cap that evening. Charlie helped his teammates to a 1-0 victory – the goal being scored by Portugal’s Artur Corrreia after 43 minutes. Now that’s the type of ‘gift’ I appreciate – much better than the Glasgow 800 souvenir mug we all got at school.Other ‘pressies’ went to Bruce Rioch of Derby County and Hibs’ Arthur Duncan in the shape of their debut caps as Uncle Bulgaria, Orinoco, Bungo and all the other furry fockers looked on appreciatively.God knows what the Portuguese made of it all….