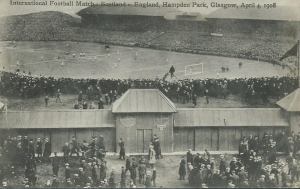 As promised here is a postcard of Hampden from 1908. I found this in a bunch of postcards belonging to my Dad. It has actually been posted in May 28th 1908, although the writing is so tiny it’s hard to read. I can’t work out who sent it but his address is 8 Corsewall St. in Coatbridge and it’s going to a M. Lewis Esq. at 10 Montrose Avenue, West Kilburn, London. As I said some of it is quite hard to read but from what I can detect the writer has been too busy to do anything except work and is a bit annoyed he hasn’t been able to take in or even play a game of cricket.
He then goes on to talk about the game on the card and how he has marked an ‘x’ above J. Quinn the pick of the “Scotchman”, that day. If you closely at the photo you can see an ‘x’. The player in question was in fact Jimmy Quinn of Celtic who would play 11 times for Scotland, scoring 7 times including four against Ireland in March 1908. Jimmy is Celtic’s fifth all time goalscorer and indeed was first player to score over 200 goals for them.
Another player of note, playing that day is Hearts legend Bobby Walker. Bobby played 461 League games for Hearts scoring an impressive 311 goals. He was known as Football’s First Superstar and indeed according to the 1934 Football Encyclopedia edited by Frank Johnson refers to him as ‘the greatest natural footballer that ever lived’. Bobby gained 29 caps for Scotland, including 11 against England in a 13 year Scotland career, which saw him score 8 times for the National team.

The full Scottish line-up was; Peter McBride (Preston North End), Alexander McNair (Celtic), James Sharp (Woolwich Arsenal), Andrew Aitken (Middlesborough), Charles Thomson (Hearts) captain, John May (Rangers), James Howie (Newcastle United), Robert Walker (Hearts), Andrew Wilson (Sheffield Wednesday), Walter White (Bolton Wanderers) and James Quinn (Celtic).
There is a high number of Anglos in the side, however looking at games from around that time it was not unusual for the England game to have so many, although games against Ireland and Wales sometimes had none.
As to the photograph, it looks as though it’s taken of the West Stand and probably from somebody’s front window on Somerville Drive. Is it me or is there a uniquely balanced man just left of the nearest goal? I have looked in other photos of the time and it is indeed a black flag flying but I have no idea why. As to the postcards worth the ‘x’ does devalue it but I have no idea of it’s worth. I would be interested in similar postcards but haven’t really seen any except there is one of Jimmy Quinn v England on ebay in not so good condition for £143.00. If you know of others please let us know.