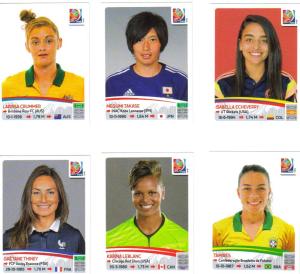 The seventh women’s world cup finals kicks-off in Canada on 6th June and that is yet another major football tournament that Scotland won’t be appearing at, although at least our lassies made it through to the play-offs where they lost to the Netherlands. If the Scottish Women had managed to make it to Canada I had planned to try to convince the Missus that our ‘Holiday of a lifetime’ should include visits to Vancouver, Montreal and Ottawa such is my desperation to see Scotland on the big stage again.

It was not to be however and so I’ll have to content myself with watching it on tv and collecting the associated panini stickers. It’s not sad, it’s an attempt at equality. [Aye right- highly sceptical Editor]. Our good friends England have made it through to the last 24 and they are in Group F with France, Colombia and Mexico. Holders Japan, the USA, Germany and Brazil are amongst the favourites to win the competition however I don’t know if I’ll bother with a bet as history has shown that I understand little about tactics/formations etc and even less about women….

I’ve attached some sticker images from the 2015 collection and I have to say that the French jersey looks damned attractive [not disimilar to Scotland’s at Italia 90] so I might cheer on France – as well as England! And finally, I thought I would give Scotland striker Kim Little a mention as she has made it on to the short list of five for BBC’s inaugural Women’s Footballer of the Year award – with her fellow nominees coming from Brazil, Spain, Germany and Nigeria. Good luck Kim – you wouldn’t be the first Scottish Woman this year to deservedly hammer her rivals at the polls.