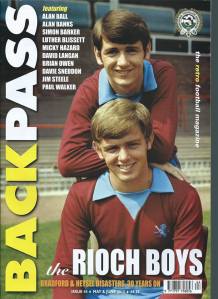 So once again I was looking through the latest football magazines and came across one with a Scottish Internationalist on the front, Bruce Rioch with his lesser known brother Neil. Neil also played with Luton and Aston Villa alongside Bruce but his career never hit the heights it did for Bruce although apparently he is the answer to a trivia question now i.e. Who was the first Englishman to touch the ball in the 1966 World Cup? The answer Neil Rioch, as he was a ballboy and the Germans hit the ball out of play before an English player could hit it.
There are interviews with both Bruce and Neil, it is interesting that Bruce was Arsenal manager for one year only but it was he who signed the great Denis Bergkamp. There is also a couple of paragraphs on his time with Scotland, mostly about games at Wembley and it actually passes over any mention of the nadir that was Argentina.
Elsewhere in the magazine, Pat Nevin looks back on his time with Scotland in winning the 1982 UEFA Under 18 Championship, where he was the Player of the Tournament. Ex- Dundee player Jim Steele looks back on his career with Dundee, Southampton and playing in America. Jim was called up for a Scotland game in 1971 against Belgium but never played nor was he picked again. Craig Brown has a column and writes about the Kilmarnock Scottish Champions of 1964-65 season. Other than that there not much else that is Scottish although I can’t believe a Reading Historian gives his All time Reading XI and there’s no place for Graeme Murty!