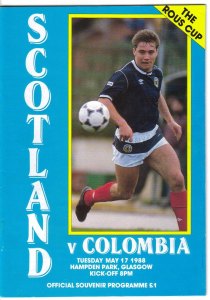 On 25 May it will be the 30th anniversary of Scotland winning the first-ever Rous Cup courtesy of a 1-0 victory over England at Hampden in front of 66,489. Richard Gough – then of Dundee United – got us the winner in the 68th minute and the England team included the likes of Peter Shilton, Terry Butcher,Glenn Hoddle, Bryan Robson, John Barnes, Trevor Francis and Gary Lineker.

The Rous Cup was an end of season tournament – a supposed replacement for the British Championship – that was named after the former FIFA President Sir Stanley Rous and which ran from 1985 to 1989 inclusive. In 1985 and 1986 the Rous Cup comprised of one-off matches between the ‘Auld Enemies’ whilst from 1987 to 1989 it consisted of a triangular tournament involving Brazil, Colombia and Chile respectively. The final arithmetic shows that there were eleven Rous Cup matches in total- six at Hampden and five at Wembley and that both Scotland and England played in eight matches each. Roy Aitken and Alex McLeish plus England’s Chris Waddle all have eight Rous Cup appearances to their names.

England won the Rous Cup in 86, 88 and 89 with the Brazilians triumphing in 1987. Incidently, Scotland’s one home game of the 1988 competition was against Colombia but only 20,487 turned out to see Dundee United’s Kevin Gallacher and Andy Walker of Celtic win their debut caps against the colourful South Americans which included the likes of Jose Higuita [the goalie who became famous for his scorpion-kick clearances] and Carlos Valderrama [whose unusual hairstyle drew comment in the programme that he looked like a mixture of Ruud Gullit and Catweazle -google it if you must] as well as the ill-fated Andres Escobar.

Ultimately, the competition failed to capture the imagination of supporters and sponsors alike so don’t expect to see a replacement ‘Blatter Cup’ coming along any time soon. From an anorak perspective, the tournament did provide an unusual clutch of match programmes – as did the Kirin Cup and the Carling Nations Cup. And finally, surely it’s only a matter of time before Scotland are invited to take part in the ‘Baltic Cup’. I know that geographically we are some distance from the Baltic Sea- but it didn’t seem that far weather-wise against Gibraltar at Hampden in March