Two for the price of one here.

Former Scotland sweeper/central defender William Ferguson Miller hits 60 years of age on 2nd May, 2015. Scary isn’t it? We also nearly missed it, sorry Willie.Willie won his first cap against Romania in a Euro qualifier in Bucharest in June 1975 and his 65th and final cap against Norway at Hampden in November 1989. Both matches finished 1-1 and the latter game saw Scotland clinch qualification for Italia 90. Alas Miller did not make it to Italy as an injury sustained in the Norway game effectively ended his playing career which had included appearances at the World Cup Finals in Spain 1982 and Mexico 1986. 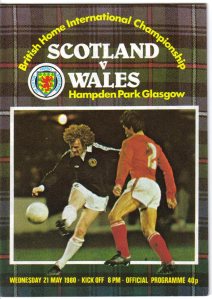 He only scored one goal for Scotland – in a Home International 1-0 victory against Wales at Hampden in May 1980 but it was his consistent reliability and self-assuredness in defence that he is remembered for. In short he was bloody marvelous at keeping those opposition buggers at bay!Willie [along with his regular central defensive partner Alex McLeish] are integral members of many peoples Scotland dream team.Many Happy Returns Mr. Miller.