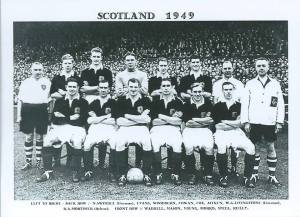 A different team photo this time although not exactly a good looking bunch either. This photo is of the team prior to the Ireland game of October 1st 1949. There’s a couple of smiling faces but I’m sure there would have been more at the end of this game as Scotland won 8-2, one of their four wins in the perfect year of 1949.
I know four games isn’t much but still, in those four games Scotland beat England at Wembley, France and Wales at Hampden as well as the Irish pummelling. Overall the Scots scored 15 goals letting in three, two which were against Ireland.

Traditionally, right up until the late sixties the Home Internationals would start with games against Wales and Ireland in October and November with the English game in April of the following year. So the first game of 1949 was against England at Wembley in April 7th.

Due to the war, opportunities for caps had been unavailable, so of this team only George Young (12) and Billy Steel (10) had caps in double figures. Sammy Cox and George Aitken were making their debuts.

Scotland beat England 3-1 with Mason, Steel and Reilly scoring for Scotland. Reilly had a habit of scoring against England, indeed 6 of his 22 goal tally were against the Auld Enemy. The England side itself contained legendary players such as Stanley Matthews, Stan Mortenson, Newcastle’s Jackie Milburn and Tom Finney. Having already beaten Wales and Ireland that season Scotland topped the British Championship that year

On April 27th France came to Hampden and Scotland defeated them 2-0 in front of a staggering crowd of 125,683. Third’s Jimmy Mason made way for another Rangers player ,with Willie Thornton taking his place. Goals that day, both came from Billy Steel.

So on to October and the start of the 1949-50 Home Internationals which would double up as qualifiers for the 1950 World Cup in Brazil with the top two teams going through.

Jimmy Mason was reinstated for the team to play Ireland on October 1st at Windsor Park, but Billy Houliston would lose his place to Henry Morris of East Fife. Henry was to make a debut that players can only dream of.

Henry scored after only two minutes. By half time the Scots were five nil up with Waddell scoring twice and Reilly and Steel adding one each. Steel would incidentally score four against the Irish at Hampden the following year in a six – one thrashing. Morris would add two in the second half to complete his hat-trick with Mason completing the Scots scoring.

Morris’ reward for scoring a hat-trick in his debut was to be never called up again for Scotland. As stated above, the game finished 8-2, England would go one better and beat the Irish 9-2 a month later.
The final game of the year would see Waddell, Mason and Morris all drop out with Liverpool’s Billy Liddell coming in, along with debut caps being given to Celtic’s John McPhail and Alex Linwood of Clyde. The Scots would win 2-0 with McPhail and Linwood justifying their selection by scoring the goals. England had already beaten Wales 4-1 in October.

So what was the Scotland team’s reward for the perfect year? Qualification for our first World Cup was already assured but in a moment of hubris the SFA decided that Scotland would only travel to Brazil as winners of the Championship that season. Fate would ensure that like any other time we have needed to be the English for a place in a major tournament we would fail, as the Scots lost one nil at Hampden in April 1950.

Scotland would be failed by the SFA and their committee mentality throughout the 50’s, whether it was their West of Scotland bias; failing to pick the best players available time after time, their incredulous cowardice in not standing up to Rangers who took their players on a tour of North America refusing to release for the 1954 World Cup or just the haphazard / amateurish way they went about their business back then.

However, given the recent ticket issues and the fuss over the Qatar game have things changed that much.