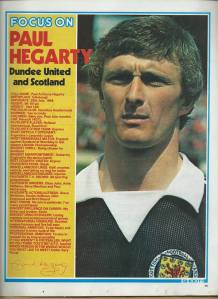 Yep, it’s another of those in depth Shoot interviews where we find out a bit about a players hopes, dreams, ambitions and philosophies of life but mostly some trivia. This time it’s Paul Hegarty of Dundee United. It’s fair to say that Paul didn’t have the greatest of Scotland careers, playing a total of eight games and losing four of those including two defeats to England. However, it would also be fair to say that the start of Jock Stein’s reign as Scotland manager was pretty poor too and perhaps had it been a lesser person he may well have been given the heave – ho.
Paul’s first cap came on May 19th, 1979 against Wales in Cardiff. There were quite a few players making their debut that day too. George Burley and John Wark of Ipswich as well as Liverpool’s Alan Hansen started that day. It be fair to say that only Wark is probably remembered all that fondly by Scotland supporters.
It was an ex- Liverpool player who made the most impact that day though, as John Toshack scored a hat-trick in a 3-0 thumping.
With Hansen dropped Paul, lined up alongside Gordon McQueen for the midweek game against Northern Ireland with Arthur Graham scoring the only goal to give the Scots victory at Hampden. On the following Saturday, this defensive line-up was retained but 100,000 people crammed into Wembley saw the Scots go down 3-1 despite taking an early lead through Wark.
A week later and it’s Argentina with a young Maradona’s turn to put three past Scotland, Hegarty is paired with Hansen and Dundee United teammate David Narey was also given a starting berth. Arthur Graham scores a late consolation but the day is all about Maradona.
Hegarty makes a sub appearance at half time in our next game five days later a Euro Qualifier against Norway in Oslo, which the Scots coasted 4 nil.
It’s not ‘til the following years’ Home Internationals that Hegarty is chosen again, lining up versus Wales at Hampden. Aberdeen’s Willie Miller and Alex McLeish are also in the line-up with Miller given a more forward role that enabled him to score the only goal and indeed his only goal for Scotland as we all know. Come the Saturday and things don’t work out so well for Hegarty and Scotland as they go down 2-0 to England at Hampden. Fast forward three years to Paul’s final cap in which three other Dundee United players are playing. It’s against Northern Ireland on May 24th, 1983 and Scotland play out a dull nil nil draw. Incidentally the only Aberdeen player on show at the start of the game, is Neil Simpson making his debut; it’s not surprising as they have won the Scottish Cup three days prior and the European Cup Winners Cup only a fortnight before. On this last occasion Paul was made captain of the team.
So for Paul, that was it on the International front.Now to focus on his focus on. His favourite player is Ruud Krol of Holland, most difficult opponent was not Maradona but teammate Leopoldo Luque. Most memorable match is the game at Wembley to England, Biggest Disappointment – getting beat the aforementioned match.
Quelle Surprise his favourite food is Steak! Among his singers Andy Williams and eh . . . Barry Manilow (my God man what were you thinking). Favourite Actors / Actress – Steve McQueen, Dustin Hoffman, Clint Eastwood and (Whoo-hoo Photo time) Britt Ekland. At first I thought a strange choice but she was in some cult films; Get Carter, Wicker Man and of course the Man with the Golden Gun.

Finally, it was good to see someone whose professional ambition has been realised as Paul wanted to stay in Football for as long as possible and given that he has recently signed a two year contract as manager of Montrose I would say he is doing pretty well by my reckoning. Well done Paul.