Happy Birthday David Narey – So much more than a Toepoke 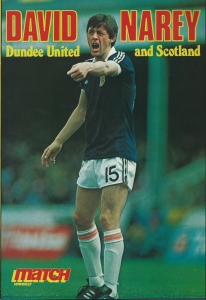 David Narey will be 59 on June 12th. David Narey’s Scotland career started in 1977 and finished in 1989, however in between that, were some years he was never picked (1984 and ’85) and in five of those years he only featured in one game (1977,’78,’87’88 and ’89). David made his first appearance for Scotland in April 1977, coming on as a sub in a friendly match at Hampden against Sweden. David was the first Dundee United player ever to gain an International cap for Scotland. Unfortunately for Narey, this was Willie Ormond’s last game in charge of Scotland.

Jock Stein picked Narey to start in his second game in charge against Portugal in Lisbon, the Scots lost one nIl. Narey would play in a team with two other recognised Centre Half’s in Martin Buchan and Gordon McQueen. Narey would often be played as a holding midfield player for Scotland as well as playing at full back. This would be Buchan’s last game for Scotland.

It would be fellow Dundee United player Paul Hegarty that would keep him out of the starting line up in the next few games, although he did make another subs appearance.Cap number 4 would see him return to the starting line up and play alongside Hegarty in that iconic game where Diego Maradona would blow the Scotland team and the Hampden crowd away with his youthful skill. This was in June 2nd 1979 with Argentina beating Scotland 3-1.

He lined up with Alan Hansen and Alec McLeish for a Euro Qualifier against Portugal in March 1980 which the Scots won 4-1. It’s a bit typical of Scotland that almost same side would draw a blank against Portugal six months at home again in a World Cup Qualifier. Narey would make four Scotland appearances in total in 1980 but three would be in friendlies with Willie Miller playing alongside Alex McLeish in two of those.

’81 would see him play in a Home International game against Wales with Paul Sturrock making his debut. Scotland would go down 2 nil at the Vetch Field, Swansea that day. However, a few days later would see both United players taste victory against England as subs at Wembley with a John Robertson penalty making the difference.Although he played in three of the four Scotland games prior to the World Cup in Spain, he was not picked to start in the New Zealand game that begun our tournament. Narey came on in the last seven minutes.We all know what happens next, Narey, who was a surprise starter for the game against Brazil replacing Danny McGrain at full back, was even more of a surprise scorer with that rocket shot from outside the box famously described by Jimmy Hill as a ‘toepoke’.Of course Scotland lost the game 4-1 but Narey’s goal will never be forgotten. Narey retained his place in the line-up for the calamitous game against the USSR in Malaga.Narey would make three more appearances in 1982 and then six in 1983 including a tour of Canada, which saw Scotland take on and beat the home nation three times. However, Narey was then discarded by the national team as Miller and McLeish became the regular pairing.

After the untimely death of Jock Stein, it was the short reign of Alex Ferguson that saw Narey re-established in the Scotland team. Cap number 26 came in a friendly against Israel in Tel Aviv with David playing alongside Willie Miller and four other Dundee United players; Richard Gough, Maurice Malpas, Eamonn Bannon and Paul Sturrock. The Scots won one nil with Paul McStay scoring the only goal.Narey would play two games in Mexico ’86, starting in the 2-1 defeat to West Germany and in that woeful nil nil draw against Uruguay.

David would play in two non-score draws against Bulgaria and the Republic of Ireland in our opening Qualifiers for Euro ’88 in a rather inauspicious start to Andy Roxburgh’s Scotland career.

A recall in 1987 for a 4-1 pumping by Belgium in another Euro Qualifier that we would rather forget, followed by an 1988 defeat to Italy in Perugia and finally in 1989, Narey played in that tense 3-2 win over Cyprus in Limassol with Gough scoring in about the ninety fifth minute saw David’s Scotland career come to a close.So All the Best to David Narey, 35 caps for Scotland and of course the World’s Greatest Toepoke ever!