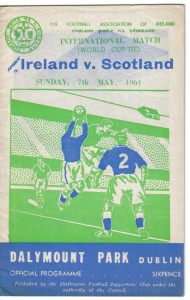 Our match on 13th June will be our seventh meeting in Dublin with the Republic of Ireland. Of the six played to date we have won two, drawn two and lost two.In May 1961 Scotland won a world cup qualifying tie 3-0 at Dalymount Park just four days after we had beaten them 4-1 at Hampden. Of our Dublin heroes only skipper Eric Caldow was in double figures cap-wise whilst our scorers were fellow Ranger Ralph Brand and sole anglo – Everton’s Alex Young – who got a double.

At Dalymount Park in June 1963 the Irish won a friendly match 1-0 against a Scotland team that included Jim Baxter, Willie Henderson, Denis Law and Ian St. John. Manchester United’s Noel Cantwell did the damage.Hmmm……
Another friendly at Dalymount Park in September 1969 ended in a 1-1 draw after Colin Stein had given Scotland the lead after 8 minutes only for it to be cancelled out by Don Givens 20 minutes later. 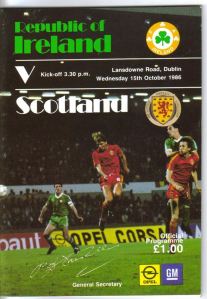 In October 1986 a Euro Championship qualifier at Lansdowne Road finished 0-0 with Celtic’s Pat Bonner denying the likes of Celtic’s Mo Johnston and Graeme Sharp of Everton. Ultimately it would be Jack Charlton’s Ireland that would travel to the finals in West Germany in 1988.

Scotland eventually won a friendly match in Dublin when we triumphed 2-1 at Lansdowne Road in May 2000. Ireland which included Kevin Kilbane, Jason McAteer,Niall Quinn and Robbie Keane took the lead after only two minutes thanks to an own goal from Craig Burley. First half replies however from Don Hutchison and Barry Ferguson did the trick whilst Hearts’ Gary Naysmith won his first cap for Scotland. 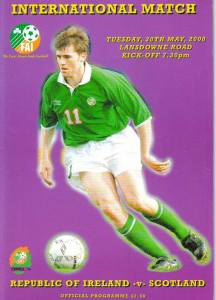 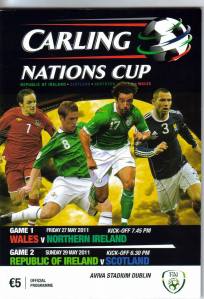 Our most recent visit to the Irish capital came about in May 2011 for a Carling Nations Cup match at the Aviva Stadium. With Scotland and the Republic of Ireland having beaten both Wales and Northern Ireland we had a final match showdown in this contrived and largely unloved four nations tournament. Unfortunately for us that man Roibeard O Cathain [Robbie Keane] done for us with a first half goal in front of a crowd of only 17,694 – no problems getting a ticket that night.