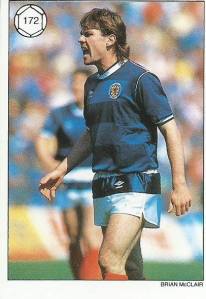 And so here we are, going from the team that ended tenth last season to Premiership Champions Chelsea at the top. It is quite depressing and for some teams it’s even before the 1998 World Cup that they last had a Scottish Internationalist playing for them. In tenth place last season after their revival under Alan Pardew came Crystal Palace. Surprisingly there has only ever been 4 Palace players capped for Scotland. Current player James MacArthur who was a major part of their resurgence last season and Barry Bannan who is also on their books but spent the tail end of the season on loan to Bolton are two.

In the early part of this century Dougie Freedman played his two Scotland games, scoring in a 2-1 win over Latvia in 2001 but then also playing in that 5-0 drubbing to France under Berti Vogts in 2002. David Hopkin in the late ‘90’s earned two of his seven caps as a Palace player.

Stoke City have Charlie Adams on their books who has won eight caps with them. Although Phil Bardsley played 25 League games for Stoke last year, he has not as yet played for Scotland as a Stoke City player. Prior to Charlie Adams the last Scot to get capped at Stoke was William Sturrock Maxwell who won his only cap in 1898!

Here’s hoping Jay Fulton can achieve that which his father Stevie could never do and gain a full International cap as currently no Swansea player has ever been capped for Scotland. I did think at one point that Craig Beattie might have done so but no, all his were with Celtic and West Brom and then I thought Stephen Dobbie. Of course it was Scott Dobie at West Brom who was capped for Scotland. Dobbie, Dobie what a Dobber I am. Ex-Hearts player Andy King is also on the books at Swansea so maybe there’s a chance that he could provide the first cap too.

Next up came Southampton. Danny Fox, Nigel Quashie anybody? No great shakes there but there was also Christian Dailly for one of his 67 caps, Stephen Crainey for 2 and topping the all-time list Neil McCann with 10 of his 26. Liverpool once that mighty bastion of Scots with the likes of Dalglish. Souness, Hansen and before that St. John and Billy Liddell have had very few of late. However, recently they did have Charlie Adams for a while and there was also the embarrassing stat of Danny Wilson’s five caps which meant he played more times for Scotland than he ever did for Liverpool in the league. An all too common factor of a lot of the people Berti Vogts capped.

Just failing that Champions League place came Tottenham Hotspur. Alan Hutton is the obvious one there, winning 13 of his caps whilst at White Hart Lane. Prior to that goalkeeper Neil Sullivan also won 13 caps there too. In the late 90’s Colin Calderwood won 32 of 36 caps as a Spurs player.

And now the rarified air of the Champions League qualifiers, where the statistics get poorer and more depressing. Although there are one or two players peppered about in reserves and development squads, there’s no one who seems close to making a first team place or even a 25 man Champions league squad.

Of course, up until recently Darren Fletcher carried the lone flame for Scots in the top 4 at Manchester United. Darren is Manchester United’s most capped Scottish player with 65 in total with Denis Law coming second with 35 of his 55. Michael Stewart did win 3 caps with United in 2002 under Berti. Before that you go back to the early nineties with Brian McClair, now of course the SFA’s Performance Director.

Arsenal; it’s even more depressing as we have go back to Charlie Nicholas in 1987 as he featured in a Rous Cup defeat to England. That’s almost thirty years with no end in sight although Steven Naismith once went for a trial when he was a Killie player but Arsene Wenger never took him on.

Manchester City haven’t been a Top 4 team for that long so surely there must be some good news there? Ex-Arsenal player Paul Dickov gained two of his ten caps whilst at City in 2000. Before that it’s back to the ‘70’s and early ‘80’s with Asa Hartford and before that Willie Donnachie.

And so to the Champions Chelsea. So who was the last one? Roll of the drum please . . . it was Warren Cummings who made a brief one cap of 45 minutes against the mighty Hong Kong XI in 2002. Of course, Warren never played for Chelsea at any point but was on their books in May 2002. Before that it’s Craig Burley who won 20 of his 46 caps as a Chelsea player in the build up to France 1998, by which time he was a Celtic player. In the years prior to that, there was quite a few as Pat Nevin, David Speedie, Tom Boyd, Gordon Durie and John Spencer were among those that won caps.There are two Scots among Chelsea’s reserves with Alex Davey and Islam Feruz, but whether either of them make it, is yet to be seen. Feruz, of course may not even be available to Scotland if he progresses, given his recent request not to be chosen for Scotland Youth teams at this point.

Still, we did have one player in a Champions League squad other than Fletcher, with Ryan Gauld at Sporting Lisbon but even then, he didn’t make it to Panini sticker level. Maybe next year.