When All Roads Led to Leeds 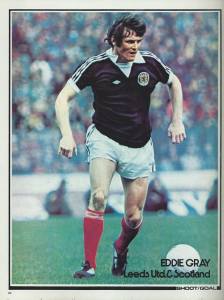 Lee Erwin’s move to Leeds last week reminded me of the relationship the Scotland team has had with Leeds in the past and maybe if things go well for Lee, the future too.
One of the surprising things about Scots being capped whilst playing for Leeds is that the first player to do so was Bobby Collins in 1965. When you think of all the players in the early years of football who practiced their craft down South it is strange that it took so long. Don Revie ironically a future England manager would bring about an era of success for Leeds and ultimately Scotland, which would see Leeds provide five players for the 1974 World Cup Squad. One of his first signings was Bobby Collins. Bobby had been previously capped for Scotland 28 times first as a Celtic and then Everton player and had last been capped in 1959. His return to the International scene came in the same year he won the Football writers Player of the Year, although he would only win 3 more caps, he played alongside fellow Leeds and Scotland legend Billy Bremner when he made his debut in the dark blue of Scotland on 8th May 1965. Scotland drew 0-0 with Spain at Hampden. Billy would go on to win 54 caps in total.
The next Leeds player to become involved was not a Revie signing and is perhaps the least known of the Leeds Scotland players at this time. Full back Willie Bell had been at Leeds since 1960 joining from Queens Park, he would play over two hundred times for his club but only twice for his country. He played against Portugal in 1-0 defeat and a 1-1 draw with Brazil in June 1966.
Eddie Gray, perhaps the most skilful player of Revie’s era first played for Scotland on May 10th, 1969, sadly Scotland got beat 4-1 by rivals England at Hampden that day. Eddie would only win 12 caps for Scotland, which is rather surprising given his talent, however competition for a place on the wing was always competitive with Jimmy Johnstone, Charlie Cooke and Tommy Hutchison latterly among the contenders. Eddie was voted the third greatest Leeds player of all time with Billy Bremner and John Charles in taking 1st and 2nd place respectively. Eddie would be left out of the Scotland squad for the 1974 World Cup.

In Scotland’s last game of the 1960’s Peter Lorimer made his International bow coming on as a sub in the second half in 2-0 defeat to Austria in Vienna. Peter was well renowned for his thunderbolt of a shot, as can be seen in the World Cup game against Zaire in 1974. Peter would play over 700 times for Leeds and 21 times for Scotland.
The final two players to make up the five for World Cup ’74 were Revie signings from Scottish clubs. Joe Jordan was bought from Morton for £15,000 in 1970 and would make his Scotland debut as a sub against England in May 19th, 1973, which we lost one nil. However, his fourth appearance in the blue of Scotland would be his most memorable, coming on for Kenny Dalglish at Hampden in September, 1973 to score the winning goal against Czechoslovakia to send us to the World Cup in 1974. Joe would win 52 caps altogether, scoring 11 goals along the way.
Gordon McQueen was a bargain buy from St. Mirren in 1972 for £30,000 made his Scotland debut against Belgium, on June 1st, 1974 a fortnight before our opening game on the World Cup. Scotland lost this World Cup warm up one 2-1. Gordon would win 30 caps in total.
By the time of the 1978 World Cup, Revie had left Leeds as had Jordan and McQueen to Manchester United, which meant there was no Leeds player in the squad for Argentina. Over the years there have been quite a few Leeds players representing Scotland including Frank Gray, Gordon Strachan, Gary McAllister and even in recent years Snodgrass, Bannan and McCormack but sadly the days of Leeds supplying the backbone of a Scotland squad have long gone.