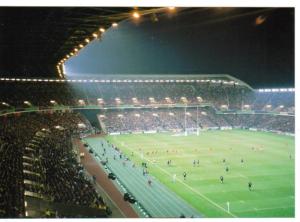 If you’ve bought issue 3 of Scotland Epistles [and if you haven’t then you should be ashamed] you will have seen the article which asks the question – ‘When it comes to supporting Scotland do you swing both ways – ie do you support your country at Association Football AND Rugby Football?’

Now of course rugger isn’t nearly as good as soccer but between 18 September and 31 October 2015 Scotland will head south into England to compete in our EIGHTH successive Rugby Union World Cup Finals. That’s a 100% record by the way and although the likes of Argentina and Italy can match that, Spain and Portugal have only qualified once whilst both Brazil and Germany have yet to qualify – and yes they have been trying [no pun intended]. Meantime, Georgia will be making their fourth consecutive appearance at the finals.

The 2015 Finals will comprise of four pools of five teams so you get at least four games to enjoy. Scotland will play Japan at Gloucester; USA at Elland Road, Leeds; and South Africa and Samoa at St.James’ Park, Newcastle – but not on the same day though as that would be too difficult although our soccer team did manage to beat both Trinidad AND Tobago at Easter Road on Sunday 30th May 2004. I’m gibbering now……

In 1991 Scotland came desperately close to reaching the actual final itself, leading England 6-0 at one stage in the semi-final at Murrayfield before losing 6-9. Just to add to the pain, the usually reliable Gavin Hastings had an Iwelumo moment and missed an easy chance to equalise and so the glory and the bragging rights went to England skipper Will Carling – a man who makes the likes of Lineker, Shearer, Ian Wright, Adrian Chiles, David Cameron and Genghis Khan appear cuddly and lovable by comparison.

It’s unlikely that Scotland will win the 2015 Rugby Union World Cup but at least we are at the finals and as numerous other nations continue to improve, that is not something we can take for granted much longer.The photograph is from Scotland’s 1999 World Cup quarter-final match at Murrayfield against New Zealand – the ‘Brazil’ of rugby union, and although we lost there was no Tom Boyd moment. Finally it will be interesting to see if anyone will admit to liking this article as that may be viewed as akin to coming out of some sort of closet. Go on, I dare you….