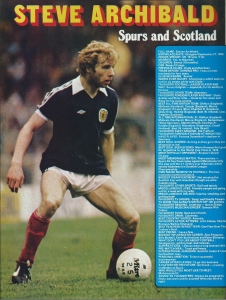 Steve Archibald is another on the long list of failed Scotland strikers, despite playing in the great Aberdeen team under Alex Ferguson, an FA Cup winning Tottenham team and also Barcelona, he never made the grade with the national team. Steve would play 27 times for Scotland and would only score 4 goals.
Yet it started so well. Steve made his debut against Portugal at Hampden on 26th March, 1980. Scotland were already 2 nil up when Steve came on for Kenny Dalglish and within twenty minutes Steve had scored. Scotland would go on to win 4 nil. His Aberdeen teammate Alex McLeish would also make his debut that night, however this would be Steve’s one and only cap as a Don.

By the time of cap number two in May, Steve would be a Tottenham player. He was given a starting berth against Northern Ireland alongside Dalglish but Scotland would lose one nil. It is fair to say that the first couple of years of Jock Stein’s reign, Scotland were fairly poor and inconsistent.

Cap number three came in a friendly against Poland in Poznan in May 1980 with Dalglish, Joe Jordan and Archibald all starting. With that all starring forward line of course we got beat 1-0. Three days later in Budapest with Archibald starting alongside Alan Brazil, the Scots went down 3-1 with Steve scoring the consolation goal.

In fairness to Steve his Scotland career is one of the really being second to the likes of Dalglish, Jordan and Andy Gray in his early days. He did start some games in our successful 1982 World Cup Qualifiers including home games against Northern Ireland, Israel and away to Portugal. Goal number three came in rare win against Northern Ireland at that time but not in the Qualifiers rather in a 2-0 win in May ’81 at Hampden in the Home Internationals with West Ham’s Ray Stewart scoring his only Scotland goal. Steve continued upfront for the game at Wembley that year which saw Scotland win 1-0 with a John Robertson penalty which came after Steve was fouled by Bryan Robson. A slightly dubious but no doubt righteous decision. Archibald didn’t feature too much in the warm-up games for Spain ’82 as Alan Brazil seemed to be favoured more but he would come on as a sub against New Zealand in opening game of the Finals and score his last goal for Scotland in the 5-2 win. He was then chosen for the final two group games starting against both Brazil and the USSR.
After, the World Cup he played in some Euro Qualifiers but it would be the rise of Maurice Johnston that would start to see him get less game time. Interestingly, he was returned to the team for a World Cup Qualifier against Spain in Seville. This was Steve’s first cap as a Barcelona player; Scotland lost one nil. Cap number 26, was as sub against Iceland in Reykjavik in Jock Stein’s penultimate game in charge in May 1985, in which Jim Bett scored the sole goal.
It would be a year later that his final cap came. Alex Ferguson chose him for the game against West Germany in Queretaro, Mexico which saw us go down 2-1.
That was it for Steve and Scotland as Ally McCoist and Mo Johnston became the preferred players in the next few years. The thing about Steve; he was more an individual than a team player, often seen as a greedy player, who if there was a chance to shoot would do so. Although this led to a lot of goals for him it was not always the best choice for the team.
As for the spotlight article from Match magazine. Steve picks Danny McGrain for both his best all time British and International teams, with Dalglish being the only other Scot in his British team. His favourite food is not Steak but Lamb. Favourite TV shows are ‘Soap’ and ‘Fawlty Towers. However, it is perhaps in his Superstitions that we get a clue to his failed Scotland career. His superstition is “I always wear a long sleeved shirt”. Steve have you had a look at your photo? Of course, if you do look at photos of his time with Scotland, there’s not too many long sleeved shirts in them and given the stock players and indeed fans give to these things, then maybe just maybe . . .