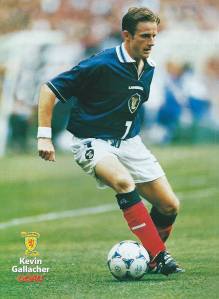 At this time when the Scotland players need to stand up and be counted particularly for the failings in Georgia earlier this month, it is perhaps worth remembering that the road to France 1998 was not plain sailing at all.

Although we had good results against Latvia and Sweden; we also had the farce that was the Estonia game which resulted in that famous ‘walkover’ match only for UEFA to change their minds and insist on a replay. Of course we were that sure we would win in the neutral venue of Monaco, but the players forgot you had to score to win games and have to be up for it against the so called minnows but sadly we were found to be lacking and a nil nil draw ensued.

With Sweden and Austria in our group, dropped points could see us fail to get to France, however Tom Boyd’s only International goal in the opposition net in 72 games and a Janek Meet own goal saw us get through a nervous night at Rugby Park in March 1997 and with a visit from Austria a few days later at Celtic Park it was time for Kevin Gallacher to make his mark on our qualifying campaign.

This was a time of very ordinary but hard working centre forwards for Scotland such as Darren Jackson, John McGinlay and Kevin Gallacher. McGinlay had scored the only goal of the game against Sweden at Ibrox in November 1996 (although that game should be remembered for Jim Leighton’s heroics too.) and Jackson had added the second goal in the win in Latvia in October the month before, however as for Gallacher; he was beginning to go the way of many a Scotland forward in all huff and puff but no final delivery. By the end of the Estonia game he had played 26 games and scored only 2 games in a Scotland career that started in 1988.

However, all that was about to change as Gallacher went on a run that was to see him score six goals in the final five games and see us through to France 1998.
First up was the other main rival in the group Austria at Celtic Park. The first goal sees a one two with Jackson and Gallacher, leave Jackson with a shot that the keeper saves but Jackson’s determination sees the ball go loose to Gallacher who needs no second invite to score. The joy on Gallacher’s face is quite evident if you watch the video of the game; however it is perhaps the confidence of scoring again that leads him to hit an audacious thunderbolt into the back of the pokey in the second half that secures the victory for Scotland.

Although, Scotland would lose to Sweden four weeks later in Gothenberg 2-1 with Gallacher scoring again, with Sweden and Austria still to play each other IF Scotland could win all their remaining games they would at least get second place in the group with perhaps an automatic qualification too.
He was not to score in Belarus in June 1997 and the hero that night would have to be Gary McAllister as one year on from his miss at Wembley he took the responsibility to score from the spot the only goal in the game in Minsk.
Two games left and both at home; Belarus at Pittodrie and Latvia at Celtic Park. In the first, Gallacher settles Scotland nerves when a save from a well worked free kick by Collins and McAllister sees him with a tap in to put the Scots in front after only five minutes. He would score a second and Scotland’s third with David Hopkin also scoring two to see us win 4-1. Against Latvia and again it’s his positioning that allows Kevin to head a goal in on 24 minutes after a great shot from Collins is parried out by the Latvian goalkeeper. With ten minutes remaining Gallacher attempts an audacious chip which rebounds off the bar for Gordon Durie to head in and it’s France here we come.

Although Kevin never gave us any more OMG moments in the Finals itself, he lit up our France ’98 campaign and his goals got us to Paris and that memorable day in the Stade De France against Brazil.
Shaun Maloney’s goals and contribution has only got us so far this qualifying campaign but we need our frontmen to produce the goods and with a little bit of luck maybe just maybe . .
The hour is near; where is the man?