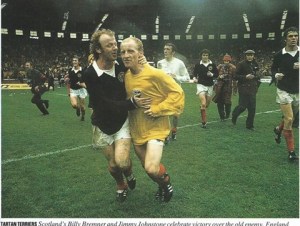 If Jimmy Johnstone had lived 30th September would have been his 71st birthday. To celebrate here is a cracking photo of him and that other ginger giant of the time, Billy Bremner. I’m not sure if Jinky has given the two fingers to the press by this time or not, after his mesmerising display against England in May 1974, a few days after the legendary boat escapade. Scotland have just won 2-0 with goals from Joe Jordan and a Colin Todd own goal. If you look at the video Jordan’s goal is really another own goal scored by Mike Pejic but the record books record it as a goal for Joe. So that’s how it is.

Jimmy is wearing Peter Shilton’s top which is about ten sizes too big for him. Also pictured is Kenny Dalglish, Danny McGrain, Peter Lorimer (I think) and Joe Jordan.
So here’s to Jinky and indeed to Billy too! Will we ever see their likes again?