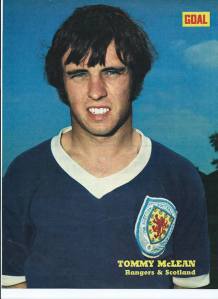 Having had Tommy photobomb in a couple of recent articles I thought it was time I did an article on him. Tommy was quite in unusual that all his caps came when he was a Kilmarnock player and not when he played for Rangers. In total, Tommy gained six caps and when you consider the calibre of player in his position at the time, he did well to earn them. As Bobby Brown had Charlie Cooke, Jimmy Johnstone, Willie Morgan and even Tony Green of Blackpool among others to choose from.
His first cap came in October, 1968 when Scotland beat Denmark one nil in a friendly in Copenhagen. Also making their debut that night was Colin Stein, who Tommy would play alongside for Rangers and Jim Herriot of Birmingham City. Bobby Lennox scored the only goal that night. Although, McLean, Herriot and Stein were all dropped for the next game; a vital World Cup Qualifier against Austria that Scotland won 2-1 they were reinstated to face Cyprus in December ’68 in Nicosia. Scotland won 5-0 nil with Stein and Alan Gilzean scoring two each and Bobby Murdoch hitting the other. Stein would hit 6 of his 10 Scotland goals against Cyprus.

I have tried to locate on the net, some photos from this game as I have a vague memory of seeing some at the time which showed the pitch to be mainly sand and with those crazy striped black and white goalposts. Any photos anyone?
Again all three were dropped for the next World Cup game against West Germany at Hampden in April ’69, but once more they were put back into the team for the first of that year’s Home Internationals against Wales at the Racecourse, Wrexham in May. This game was covered in the article ‘The M men March On’ a few weeks back in which we first saw Tommy in the background. Scotland won 5-3 with goals from McLean, Stein, Billy McNeill, Alan Gilzean and Billy Bremner. Jim Herriot only played in the second 45 when goalkeeper Tommy Lawrence of Liverpool was injured.
Although, Herriot and Stein would retain their places in the Scotland team over the next few games, Tommy would not return until a Home International game against Northern Ireland in April 1970. Making their debut that day would be Davie Hay, clubmate Billy Dickson, Willie Carr of Coventry and John O’Hare of Derby.

The only goal of the game came from a pinpoint, deep cross from McLean to O’Hare who headed past Pat Jennings to give Scotland victory. Tommy would keep his place for the Wales game at Hampden a few days later which ended in a nil nil draw. However, Tommy was to be dropped in favour of Jimmy Johnstone in the final game of the Home Internationals that year against England which would also end up 0-0.
Tommy’s final game would see him return to where it all began, as Scotland played the third game of their Euro Qualifiers in Copenhagen. Unfortunately, Finn Laudrup (Brian and Michael’s father; no, not them that sang ‘Matchstick Men and Matchstick Cats and Dogs’ in the 70’s but the football players) would score the only goal of the game that more or less saw the end to Scotland’s Euro chances and indeed Bobby Brown’s management of Scotland. Interestingly Tom Forsyth, also a future teammate made his debut that night as a Motherwell player.