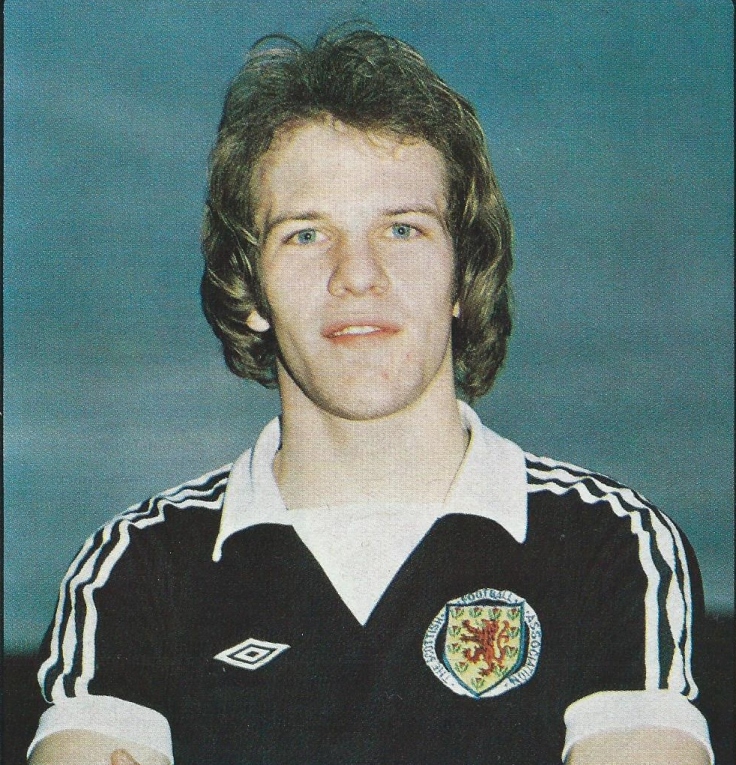 Andy Gray will turn 60 on November 30th. It’s fair to say that although Andy played 20 times for Scotland he never really had that period where you could say he was an established first choice striker for Scotland. Of course, anyone who played at the same time as Kenny Dalglish would always be second fiddle as such and there’s was quite a lot of competition for that place such as Joe Jordan, Derek Johnstone, Alan Brazil, Willie Pettigrew and Steve Archibald among others in Andy’s time as an internationalist.

Andy had won three caps at Under-23 level as a Dundee United player but by October, 1975 he had moved to Aston Villa. His final appearance at Under-23 level saw him score three goals against Denmark in a Euro Qualifier and the following month he was to make his first team bow. This time in a first team Qualifier against Romania at Hampden. Scotland were to draw one each with Bruce Rioch scoring the Scots goal. Also, making his one and only appearance in a Scotland shirt was Ayr United’s Johnny Doyle.

In April, ’76 he was in a forward line that included Dalglish, Derek Johnstone, Andy and making his debut Willie Pettigrew against Switzerland at Hampden. Willie opened the scoring after two minutes but despite the threat Scotland had upfront no more goals were to follow for either side. Willie Ormond had put out an almost experimental side with Alan Rough, Frank Gray also making their first starts, however making their first and last appearances for Scotland that night were Tommy Craig of Newcastle, Rangers players’ Alex MacDonald and Bobby McKean as well as Des Bremner of Hibs.

Cap number three in September 1976 saw Andy score his first two goals for Scotland as they routed Finland 6-0 in a friendly at Hampden. Also on the scoresheet were Don Masson, Bruce Rioch, Kenny Dalglish and Eddie Gray. Andy retained his place for Scotland’s first 1978 World Cup Qualifier in October, 1976 against Czechoslovakia in Prague. In an attacking minded team that night Scotland went with a front three of Jordan, Dalglish and Gray. Needless to say Scotland might have done better had Andy not been sent off along with Czech player Anton Ondrus in the 43rd minute. The Czechs obviously adapted quicker to the ten man game as they scored in the 46th and 48th minute to win the game two nil.

Ally MacLeod would come in as Scotland Manager a few months and despite being the top goalscorer in the English First Division for season 1976 – ’77 and in the following year scoring 29 goals and picking up both the English Player and Young Player of the Year, Andy was never picked by MacLeod prior to the ’78 World Cup and as is well known never made into the Squad for Argentina.

However, Andy returned to the fold for the first Post-Argentine Debacle game against Austria in Vienna for a Euro Qualifier. Scotland were three down by the 64th minute but goals by Gordon McQueen and Andy put a more respectable sheen on the game but it was enough for MacLeod to see the writing on the wall as he bowed out as Scotland Manager.

Andy probably thought with Jock Stein coming in he would have the chance to establish himself and indeed Andy started in Jock’s first game in charge in October, 1978 as Scotland squeezed out a 3-2 win in front of an expectant crowd of 65,372 at Hampden. Kenny Dalglish hit a double with an 87th minute penalty from Archie Gemmill claiming victory.

However, Jock seemed to prefer Joe Jordan alongside Dalglish for the next few games and it was not until March, 1980 that Andy was back in the line-up. Andy had joined Wolves in September, 1979 for a then English record of £1.5m. Andy was to score in a rare Scotland win for the time as they beat Portugal 4-1 in the final game of a poor European campaign in front of a paltry crowd of 20,233. Kenny Dalglish, debutant Steve Archibald and another Archie Gemmill penalty provided the other goals.

Andy’s 8th appearance would be a couple of months later a she came on as a late sub at Wembley in the Home International against England, which the Scots were to lose 2-0.

Andy would then get his best run in a Scotland shirt as he appeared for four consecutive World Cup Qualifiers starting in September 1980 as Scotland beat Sweden 1-0 in Stockholm with Gordon Strachan producing a slice of magic to provide the sole goal.  A non-score draw with Portugal at Hampden followed a month later with a trip to Tel Aviv in February ’81 next on the list. Scotland won one nil with Kenny Dalglish scoring in the 54th minute. Gray would come on for Dalglish fifteen minutes later as Scotland ground out an important two points. This was the only defeat the Israeli’s conceded at home and went a long way to secure Scotland‘s qualification. Andy would be recalled to start as Scotland would play out a nervous one each draw with Northern Ireland a month later at Hampden with John Wark scoring in the 75th minute to equalise after Hamilton had put the Irish in front five minutes earlier.

With four games and no goals produced, Jock Stein must have felt it was time for someone else to be given a chance with Joe Jordan once more being reinstated in the Scotland line up. In September ’81, Andy came on as a sub for Dalglish in 70th minute in another qualifier against Sweden at Hampden. Joe Jordan had given Scotland an early lead and Andy gained Scotland a penalty with a most dramatic dive in the 83rd minute, which John Robertson put away with his usual aplomb. Andy again made a subs appearance in another nervy night for Scotland, this time in Belfast when he came on for Gordon Strachan in the 70th minute. The game ended 0-0, which was enough to see Scotland qualify for the World Cup in Spain.

Again, Andy would see a World Cup Finals come and go without his presence and probably felt a bit more aggrieved having played in 6 of the 8 qualifiers with Alan Brazil, Steve Archibald, Joe Jordan and Paul Sturrock all getting the shout ahead of him.

However, Andy was recalled to the squad for the May, 1983 Home Internationals playing the full ninety minutes in all three games with Kenny Dalglish missing out; as Scotland drew nil nil with Northern Ireland at Hampden, then scoring one of the goals as the Scots beat Wales 2-0 at Ninian Park, Cardiff with Alan Brazil producing the other. In the final game once more the Scots went down 2-0 to England at Wembley.

Andy also joined the squad for the team’s tour of Canada that summer with three games against the Canadians. Andy was a sub in the second game in Edmonton, as Scotland won 3-0 with Charlie Nicholas, Richard Gough and Graeme Souness providing the goals. Scotland had already won the first game 2-0 in Vancouver; Andy scored both goals in Toronto’s Varsity Stadium as they won with the same result to end their tour.

Despite those goals, Andy once more found himself in the International wilderness with the emergence of the likes of Mo Johnston and indeed he would be called up for the squad once more for what was to prove to be Jock Stein’s penultimate game in charge.

Andy was by now an Everton player and was picked to play in what would prove to be a vital World Cup game against Iceland in Reykjavik. Scotland won by virtue of a Jim Bett goal that took a long time in coming as the Scots finally broke down the stubborn Icelandic defence in the 86th minute.

Andy would be part of the squad for that fateful night in Cardiff when Jock Stein lost his life.

Andy was never to play for Scotland after this. So here’s to Andy who like a lot of Scotland strikers over the year perhaps should have scored more goals for his country but one thing’s for certain there would be few who would have been more committed or as brave as Andrew Mullen Gray, when it came to playing for Scotland as Andy didn’t really know how to play any other way.