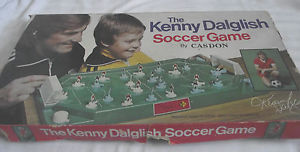 With Christmas coming up I was thinking about some of the toys we used to get as youngsters. It’s alright for all you young guys, who can’t wait for the latest FIFA game to play their heroes but back in the day you didn’t have a lot of choice of football games and they weren’t that much fun either.

At the bottom end of the market was Blow Football, two big straws, a ball and two nets . . . boy did it blow. It was alright if you were playing some common or garden friend but if you came up against someone who played the bagpipes, you just ended up with red cheeks and heavier defeats than Airdrie. Of course coming from Milton, there wasn’t too many pipers about although I do believe a lot people there now enjoy a wee bit of blow from a pipe.

Generally though, you would open up the packet, play for about two minutes, get bored and then start using the straws as peashooters and eventually fall out with your mate cos’ he cracked you one in the eye and end up wrecking your bedroom fighting each other. Not good for football practice but good for survival skills in the hooligan dominated 70’s.

You can still get Blow Football but two straws out of McDonalds and a crumpled of piece of paper will do just as well.

Of course we had other not so great games in the 70’s; Casdon Soccer was another. A table top game which had etch a sketch like controllers that turned players who had a big club foot that hit the ball. All the players were stationary except for the swivel movement. If you were really lucky you had the Bobby Charlton endorsed set or the latterly the Kenny Dalglish . . . well not lucky, it just meant you had a picture of Bobby or Kenny on the front but the same crappy game inside.

Then there was Super Striker, a five a-side game that was perhaps a step up, but still not exciting. I’m not sure if I ever played it much. Compared to Subbuteo, the players were pretty big but to kick you pressed their head and then they kicked. It was a bit boring as you moved the players to the ball and then kicked it and whatever player it ended up nearest, played next. With real diving goalkeepers too. Aye right if you could swivel it right.

Of course money was tight in the Stuart household, so I got the slightly downgraded Barras version, where you pulled the lever on the player’s leg. I can’t for the life of me remember what it was called, but again after a few games, the excitement dulled considerably. The players all came plain colour and you could choose to paint them but I was too lazy for that. Just ask the wife she does all the painting and decorating in ma hoose. (One email to that fellow sad sad man Robert Marshall and it turns out it was called Big League)

What about table football or Fussball as our European cousins like to call it?  Well in the Seventies the only thing built to last was rock music; other than that most of it was throwaway tat. So Table Football wasn’t that great as it was quite flimsily built, especially if you played with your big brother who insisted that he was allowed to tilt the table whenever he wanted.

“He always beat me at Subbuteo,

Cos he flicked to kick and I didn’t know.”

The Undertones from ‘My Perfect Cousin’ 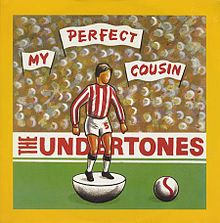 Subbuteo was king in the 70’s, of football games. The best thing was you could be your own team, for most of the other games you were either the red or the blue team.

Even though Subbuteo was still the best, it was still a pain in the arse to play. First there was that ‘grass’ cloth carpet, if you didn’t have a table to play on then it was the floor. It took ages to make room and flatten it out with your hands and then if you had a dog it was worse trying to get hairs off or trying to keep the dog from standing on it.

Once you’re set up, it’s Game on. I flicked to kick like a true aficionado, so quite quickly would get a couple of goals to the good and then it would happen.

“Aw sorry, David I just kneeled on one of your players”

“That was Joe Jordan ya bastard!”

Before you know it, you’re fighting on the carpet and not only has Jordan been obliterated, but Dalglish’s headless, Jardine’s legs have been snapped, Billy Bremner’s in a bad way and McGrain will no longer make those runs up the wings but Big Jim Holton is still standing imperiouly daring anyone to take him on. David Harvey just stood there with his arms raised at the horror of it all. Match abandoned.

You pack away the team and turn to your mate and say. “Let’s play fitba’ instead, it’s better than this crap”. Sad thing is kids don’t say that as much anymore as they prefer to play the game on computer.

(This was originally published in the Partick Thistle fanzine S.I.T.B., but some of the names have been changed to protect the innocent.)

PS. On the facebook page Ian Stewart offered up this game.

It seemed as if Subbuteo were trying to build on the success of their normal game by introducing Targetman.
You had two 5 a side teams one in blue tops white shorts the other in red and white stripes a la Everton v Southampton .
If my memory serves me right you pulled back the players legs which had a spring then let it go to kick the ball.
The pitch was enclosed so you batter the ball off the walls like you can in 5 a side.
I tried vainly to get my pals to play regularly but was fighting a losing battle and the prospect of setting up a Targetman league playing my sister constantly was unappealing (same opponent over and over like a modern day SPL).
Add to that the lack of different teams to buy, the usual Subbuteo trait of players breaking down and having to be glued in order to pass a fitness test Targetman sank faster than Monica Lewinsky at a Presidents ball.
After more than a year of not seeing the light of day Targetman was admonished from the Stewart household by my mother into the custody of “some weans who might be gled o it”
I embraced the beauty of “flick to kick ” and never looked back.
For all its failures though it was still better than the Bobby Charlton/Kenny Dalglish game