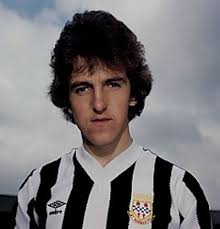 Happy Birthday to Peter Weir, who will be 58 today. Peter was a typical winger in that some days everything he touched was gold as he would easily glide past players and put in the perfect cross and on others nothing would go right for him. Peter gained six caps in total for Scotland and surprisingly 4 of them were in his time with St. Mirren rather than the majority being with Aberdeen.

His first cap came under Jock Stein in the 1980 Home Internationals against Northern Ireland in Belfast, Scotland’s first game there in ten years. Also making his debut that day was fellow St. Mirren player Billy Thomson. This team also contained three future Scotland managers in Burley, McLeish and Gordon Strachan. However, with all that talent on display Scotland were beaten 1-0 to a Gerry Hamilton goal.

Peter retained his place for the game against Wales at Hampden five days later as the Scots won 1-0 thanks to a Willie Miller goal. Yes, that Willie Miller, who with McLeish and Paul Hegarty playing was in a more forward role.

Peter wasn’t picked for the England game a few days later with Roy Aitken of Celtic being brought in to bolster the midfield for the England game. This plan went awry as the English won 2-0 at Hampden. Roy incidentally is the last player to be capped for St. Mirren as he won his final cap as a Buddie in 1991.

Scotland played a couple of friendlies after the Home International series, Peter played in both; coming on as a sub in a 1-0 defeat to Poland in Poznan and playing the whole game in a 3-1 defeat to Hungary in Budapest.

It would be three years before Peter got his chance again with John Robertson returning to international action and it would be as an Aberdeen player. Peter played in the game against Switzerland in a Euro Qualifier at Hampden in March 1983 which is famous for Charlie Nicholas’s goal on his Scotland debut.

Peter’s last game would be in December, 1983 and it was a case of back to where it all started as Scotland played Northern Ireland in Belfast. Once more the Scots were defeated, this time two goals to nil. Playing in his one Scotland game that night was Doug Rougvie of Aberdeen.

And so that was that, for Peter as Davie Cooper began to feature more and more in Jock’s plans. Peter would continue to play for Aberdeen up until 1988 and after a short time at Leicester City, return to St. Mirren and finally end his career down at Somerset Park with Ayr United.

Happy Birthday Peter and all the best.