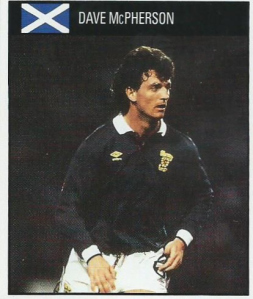 Happy Birthday Dave McPherson, who will be 52 today. Dave had a seesaw career which saw him move from Rangers to Hearts to Rangers and finally back to Hearts. Rather surprisingly, it was as a Hearts player that he would win 23 of his 27 caps and also play in Italia ’90 and the 1992 Euros.

His first cap came as a Hearts player in a vital World Cup match against Cyprus in April 1989 at Hampden playing in central defence alongside Alex McLeish. Goals from Mo Johnston and Ally McCoist would see Scotland victorious although the Cypriots did give us nervous moments when they equalised at one point.

Rous Cup duty was next as Scotland lost to England at Hampden 2-0 with goals from Chris Waddell and Steve Bull. McPherson was dropped and Willie Miller was reinstated to the team in central defence, however Dave was back in as right back for a qualifier against Norway at Hampden as the Scots drew 1-1 but it was enough to see them through to Italia ’90 at the expense of France.

Andy Roxburgh struggled to find a player for the right back slot despite Stewart McKimmie being available and as the finals approached he went with McPherson at right back. Dave played in the final friendly, a 2-1 win over Malta away and then went on to play in all three games in Italy, which as usual saw highs and lows for Scotland. Defeat to Costa Rica was followed by a nerve wracking win over Sweden and then the anti-climactic defeat to a poor Brazil team meant Scotland again headed home from the group stage. In the final game Dave was moved to central defence in place of his Hearts teammate Craig Levein.

Dave was becoming an established part of the team and would play in most of the Qualifiers for the Euros in 1992 slotting in either at full back or in the centre. With the partnership of Miller and McLeish coming to an end there didn’t seem to be a settled defence at any point with the likes of Richard Gough, Gary Gillespie, Craig Levein, Alan McLaren and even the likes of Stevie Nicol and Tom Boyd being played there on occasion.

Scotland started the group well with two wins in a row against Romania and Switzerland and then a draw in Sofia to Bulgaria and despite drawing with Bulgaria at home, Switzerland away and losing to Romania away; a win in the final game at Hampden against San Marino was all that was needed to qualify. Paul McStay provided a goal in ten minutes to settle nerves and further first half goals from Gough and Gordon Durie allowed to party to start. Ally McCoist would add a second half goal and so Scotland qualified for their first European Championships.

Scotland had topped a rather cutthroat group with eleven points just ahead of Switzerland and Romania on ten each and Bulgaria a point further behind on nine with San Marino on the old Eurovision classic of nil points. McPherson had played in all but one of the games and indeed played in all five of Scotland’s pre-tournament friendlies as well, which included wins in both the USA and Canada. Dave played the full ninety minutes in each, which is quite remarkable given the amount of substitutions in these types of games.

It is important to remember that this was an eight team tournament at the time but still Scotland were given a difficult draw and would be facing the Netherlands, a reunited Germany and CIS, which was the newly dissolved USSR flying the flag under the banner of the Commonwealth of Independent States which included Russia, Ukraine, Belarus and all those Stans i.e. Uzbekistan, Kazakhstan and the like.

Dave lined up alongside Richard Gough for his 21st cap against the Dutch in Gothenberg. The Dutch team was full of stars such as Ruud Gullit, Dennis Bergkamp and Marco Van Basten. The Scots gave a good account of themselves but ultimately lost out to a Bergkamp goal in the 77th minute.

Again, against the Germans Scotland played well but lost out to goals from Karl-Heinz Riedle and Effen Effenberg (or Steffan as his parents like to call him).

By the final game of the group, Scotland were out of it but with CIS having drawn their first two games and only two points for a win at this time they still had the chance to progress. However, it was Scotland who came out on top rather convincingly with Paul McStay giving us an early lead and then Brian McClair finally scoring his first Scotland goal to put us 2-0 up in the first 16 minutes. There was a bit of fortune to McClair’s goal as it was defected in but it was no more than they deserved. A Gary McAllister penalty in the 83rd minutes sealed a memorable win for Scotland. 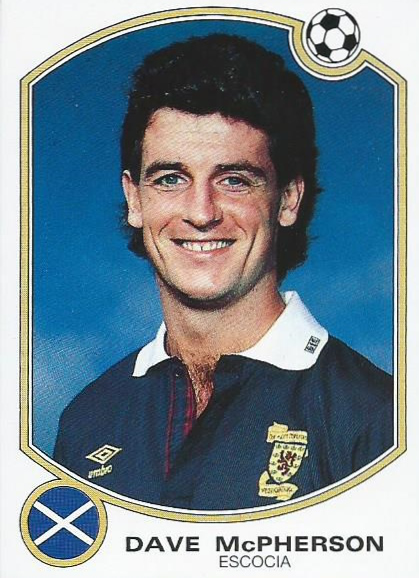 That was McPherson’s last Scotland action as a Hearts player as a return to Ibrox for £1.3m soon followed. However, his move westward would not result in many more caps although he played in three of Scotland’s opening USA ’94 qualifiers; a 3-1 defeat in Switzerland, a 0-0 with Italy at Ibrox and then a 3-0 victory over Malta in the same side.

It would be the qualifier in Lisbon in April ’93 that would be his undoing as a rather hapless Scotland defence were tore apart by a blistering Portuguese performance as the Scots lost 5-0; McPherson and Gough were the major scapegoats for that night and never played again for Scotland.

McPherson would of course make that trip along the M8 once more back to Tynecastle and play for Hearts up until 1999. Happy Birthday to Dave McPherson or as Tony Gubba would call him in commentary McFearson, and all the best.