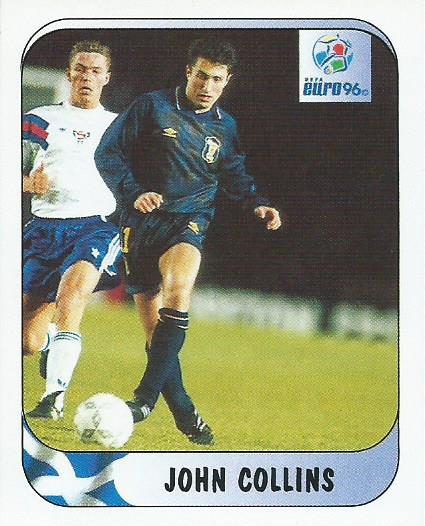 Happy Birthday to John Collins who will be 48 today. John played for Scotland 58 times and scored a valuable 12 goals including a certain one in Paris, in front of a massive Worldwide TV audience. He also has a unique place in Scotland history as being captain of the team for all of three seconds.

John was first capped as a Hibs player in February 1988 in of all places Riyadh, Saudi Arabia where Andy Roxburgh’s team were playing a friendly. John scored Scotland’s second goal a couple of minutes after Mo Johnston had scored an equaliser, however, the game was to finish 2-2.

He then seemed to have been forgotten about until the 1990 World Cup warm up games and although he was a substitute in two of three games he played; he must have been thought of highly enough by Roxburgh to be given a place in the squad for the World Cup in Italy.

John didn’t play in the World Cup but returned to the side in October 1990 as a late substitute in Euro Qualifier against Switzerland which Scotland won 2-1. This was John’s first cap as a Celtic player.

However, once more John was only used sparingly at this point and yet in March 1991, he came on as a sub against Bulgaria at Hampden in the 82nd minute to score a minute later to give Scotland the lead. A lead that was squandered in the final minute as Bulgaria equalised. However Scotland did qualify for the Euros despite this setback.

Again, it would be appearances in warm up matches, this time prior to Euros ’92 in Sweden that John would return to the side. The squads for the Euros were only of 20 players and John was deemed surplus to requirement this time round and didn’t make the cut for the finals.

The campaign for USA ’94 was always going to be a tough one; Scotland were in the second pot but were unfortunate in that both the Portuguese and the Swiss who were in pots 3 and 4 respectively were beginning to develop some really excellent players and teams. To add to that Italy were the Pot 1 team we ended up with.

The campaign under Roxburgh got off to a bad start with a 3-1 defeat in Berne, this was followed by 0-0 draw with Portugal at home in which John was reinstated to the team. John was soon given a run in the team by the manager and repaid this with a goal against Estonia as the Scot won 3-0 and then another up at Pittodrie against Switzerland in a 1-1.

By the time of the start of the campaign for the 1996 Euros in England, John had won 18 caps and Craig Brown had been in charge for a few months. John would play in all the qualifiers for the Euros scoring goals against Finland, twice against the Faroes (home and away) and finally against San Marino.

He would also finally play at a major tournament, by this time John had become an integral part of the Scotland set up, scoring goals as well as making them. He played in all three games in England and as we all know despite drawing with Netherlands and beating Switzerland Scotland failed to progress by the narrowest of margins.

At the start of the campaign for France ’98, Scotland got off to a good start with 0-0 draw in Vienna; by this time Collins was playing with AS Monaco. In the next game away to Latvia, Collins scored an excellent goal from a well worked free kick in October ’96, but the next game would mark the most bizarre incident in John Collin’s Scotland career.

Scotland were due to play Estonia on October 9th in Tallinn but made a complaint about the inadequacy of the floodlights in the stadium. This complaint was upheld and the game was rescheduled for several hours earlier. The Estonians took umbrage to this decision and refused to turn up for the game. Gary McAllister was suspended for this match and so Captaincy went to Collins. The game was started without the opposition, with Billy Dodds passing to Collins and then the ref blowing his whistle and thus John has become a well-used pub question. Who only ever captained Scotland for three seconds?

Although Scotland would be made to replay this game in John’s then home stadium; the Stade Louis II and eeked out 0-0 draw, Scotland reached the finals as the best placed runners-up with Austria taking first place.

As we all know the first game in France ’98 was a world spectacle with Scotland lined up to play the World Champions; this would also be John’s fiftieth cap for Scotland. Brazil took an early lead but John would equalise from the penalty spot in 38th minute; a moment I imagine a lot of us won’t forget whether you were in France or like me watching it at home. Sadly, we would all rather forget Tom Boyd’s calamitous own goal in the second half. John would also play in the draw with Norway and in that lacklustre performance against Morocco that we would also choose to forget.

In the summer of ’98 John would move to Everton and although he played in Scotland’s opening game in the campaign for the Euro’s 2000, he would only gain 5 more caps. He did score once more for Scotland taking a penalty at Ibrox as Scotland beat Bosnia-Herzegovina 1-0.

His final two games would be in the play-off games against England; the first of which was the 2-0 defeat at Hampden with Paul Scholes wrecking our chances of progress but John did get to sign off in good style with that memorable victory over England with Don Hutchison providing the game’s only goal.

So Happy Birthday John and thanks for some great goals and great memories.