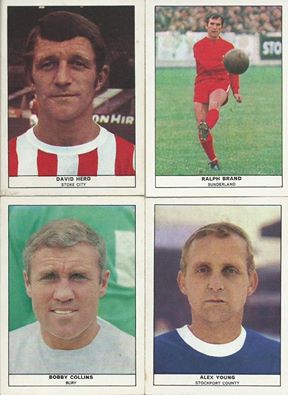 One of my favourite football cards sets is the Anglo Confectionery Set of 1968/69, which has players from big clubs such as Denis Law, Willie Morgan of Manchester United, Eddie McCreadie from Chelsea and others; it also has two players each from the Old Firm; Billy McNeill and Ronnie Simpson of Celtic and John Greig and Colin Stein. This is as far as I know the only Colin Stein football card in his Rangers strip that you would buy out of a packet; there is a Hornet Comic one too though.
As if that’s not enough, this set also has going for it; there’s only 84 cards in the set and they are still generally easy to collect but the really great thing is; it has players from really unfashionable teams such as Chester, Port Vale, Southport and Peterborough United and it is here there are some gems of Scotland players in perhaps what could be called the twilight of their careers.
Card #27 is of Alex Young, who I wrote about a couple of weeks ago. Alex played for Hearts and Everton, winning championships with both; after leaving Everton in 1968 he headed to Stockport where he would only play 23 times. Alex was capped by Scotland on 8 occasions scoring 5 goals.
Next up is card #29, which is of Bobby Collins. Bobby played for Celtic, Everton, Leeds among others and was capped by Scotland 31 times in a fifteen year period from 1950 – 1965, scoring ten goals in the process. For this set of cards, Bobby is with Bury but he would go on to play for Morton playing beyond his 40th birthday and he also makes it into the 1971/72 ABC purple back while playing for Morton.
Card #56 is Ralph Brand well known as a Rangers striker from the early 50’s to early 60’s winning the Scottish Championship six times. Brand would go on to play for Manchester City and then Sunderland where this card is from. Brand won 8 Scotland caps, scoring 8 goals.
Finally David Herd, card #62 in his Stoke City days. David had played coincidentally at Stockport before going on to Arsenal and then Manchester United. At Old Trafford he won the First Division twice and also the FA Cup in 1962-63 where he scored two goals in the Final. Herd played for Stoke for a couple of seasons and won 5 Scotland caps scoring 3 goals.
In terms of Scotland games they have amassed a total of 52 and scored 26 goals between them, which works out 1 goal in every two games. If only we had one player who could do that. One final fact, Herd and Collins played for Scotland on the day that Denis Law made his debut on 18th October, 1958 as the Scots beat Wales 3-0 in Cardiff with Law and Collins among the scorers.