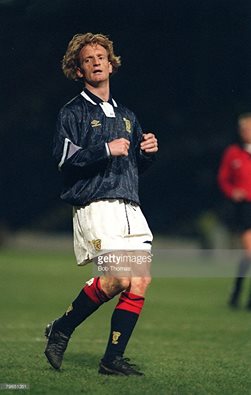 Dave will be 52 today and played for Scotland from 1992-93 and indeed was a squad member for the Euros in 1992.
Dave was also part of the Scotland Under 18 team that won the UEFA European Youth Championships in 1982 alongside the likes of Pat Nevin, Paul McStay and Gary Mackay to name a few. By the time he was capped for the full team, he had already played for Hearts and Coventry City and was then a Dundee United player. Dave would make over 350 appearances for the Tangerines in a twelve year period from 1986-’98.
His first cap came under Andy Roxburgh as part of Scotland’s pre-tournament schedule for the 1992 European Championships. Despite Scotland qualifying for the European Finals for the first time, there was a not a huge appetite for their last home game before the finals against Finland in March, 1992 as less than 10,000 turned up. Dave was the only new cap; playing for opposition was Mixu Paatelainen, who around about this time would move from Dundee United to become an Aberdeen player. Paul McStay had given Scotland the lead midway through the first half but Jari Litmanen would equalise before half time to end the scoring on the night.
Dave was then given 24 minutes of a game against the US, in Scotland’s short non-acclimatization tour of the US and Canada to prepare for playing in Sweden. Scotland won 1-0 thanks to a Pat Nevin goal after seven minutes.
Despite his scant appearances Bowman made it into the squad of twenty for the Euros but would not be given any playing time.
He would return to the side in March, 1993 for a friendly against Germany at Ibrox. Scotland would lose 1-0 with Karl-Heinz Riedle scoring the only goal. Making their debuts that night were Hearts goalkeeper Nicky Walker and Aberdeen pair Stephen Wright and Scott Booth.
After Scotland’s humiliating defeat against Portugal in Lisbon in April, 1993, Bowman was brought in to play his first competitive game; in a World Cup Qualifier against Estonia in May 1993. Scotland won comfortably 3-0 in Tallinn with goals from Kevin Gallacher, John Collins and Scott Booth. (Will post footage of this later. Please check out the Facebook page for this and other videos)
Dave would play in two more qualifiers in Scotland’s unsuccessful campaign for USA ’94. The first in September ’93 as Scotland drew 1-1 with Roy Hodgson’s Switzerland at Pittodrie with John Collis netting for Scotland. The second and his last cap came in the Stadio Olimpico in Rome, where Scotland went down 3-1 with Kevin Gallacher scoring Scotland’s solitary goal.
This would also be Andy Roxburgh’s last game in charge as Craig Brown would take over for the final qualifier against Malta, where Dundee United teammate Billy McKinlay was preferred over Dave.
Dave would of course go on to play for Dundee United for a number of years and spent some time with Raith Rovers and also Forfar, where he infamously indulged in a wee bit of name calling to a referee and ended up with a lengthy suspension. Dave has recently returned to Tannidice as a coach.
Happy Birthday Dave and all the best