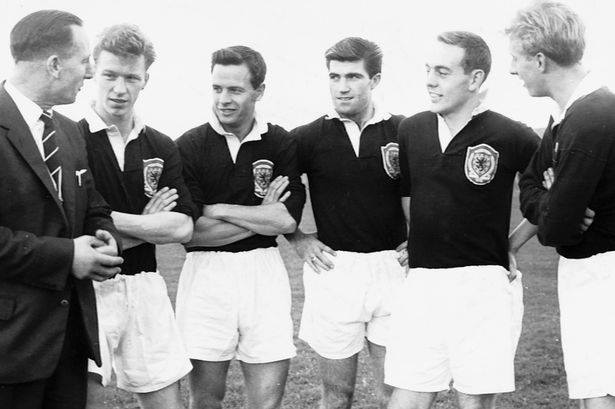 This is a cracking photo and has a rarity contained in it; a photo of Bertie Auld in a Scotland strip. While it is true that all the Lisbon Lions were capped by Scotland, Bertie was capped 8 years before Celtic’s European triumph. This was during his first stay at Celtic Park. Bertie was first picked by manager Andy Beattie to face the Netherlands in Amsterdam in May, 1959 also making his debut at full back was fellow Celt Eric Smith.
In looking up details of the match I came across the Evening Times Report and there was a couple of interesting things to note. Apparently Scotland had played a friendly against Jutland, the Danish peninsula, a few days before and it had been quite a rough and ready match with the Scots being the main culprits, perhaps this had put the Dutch on notice and so they were quite blatant in many a tackle. It was a tackle from behind on Auld in the 93rd minute that saw Bertie get his marching orders. It seems that the Dutch player was floored by our Bertie in retaliation and according to one of the reports the police had to stop Dutch fans from getting on the pitch to attack Auld.
However, Scotland did have a secret weapon that night; South African born John Hewie. Apparently, John spent the night translating as the Dutch shouted to each other, so some of their moves were anticipated. It must’ve helped as Scotland won 2-1 through goals from Bobby Collins and Graham Leggat.
Bertie became only the second player to be sent off representing Scotland and the only one so far to be sent off in his debut. However, Bertie was not cast aside and played a week later in Lisbon against Portugal. A game which Scotland would lose 1-0.
His final cap came in a Home International game against Wales at Hampden in November. John Charles would open the scoring for Wales after eight minutes with Graham Leggat equalising just after half-time and that is how it finished. It is also where Bertie’s Scotland career finished. Bertie was a bit of an outspoken player and it may well have been one of the reasons why he was not picked again; given the climate of “suits” that ran the SFA. Celtic too would move him on to Birmingham City in 1961, where he won a League Cup medal in 1963. By 1965 he was back at Celtic Park and ready to make his mark on football history
The photo seems to be taken just before the Wales game as this was the only time all five players were in the same team together. From left to right; Andy Beattie (Manager), John White, Graham Leggat, Bertie Auld, Ian St. John and Denis Law.
Remember we post a lot more stuff than Facebook sends to you, so keep clicking on the page to see what we’ve been up to.