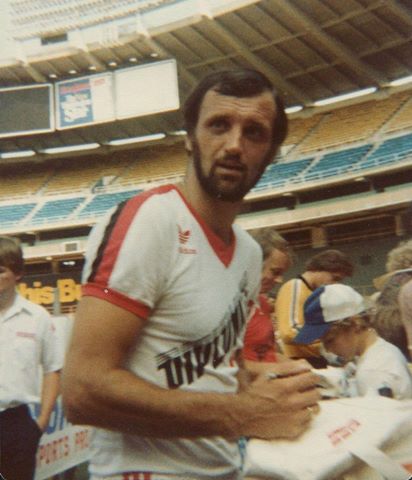 Happy Birthday to Eddie Colquhoun who will be 71 today. Eddie played nine times for Scotland at Centre Half and played over 400 games for Sheffield United where he won all his caps. Eddie is only one of four Blades’ players to be capped at Full International level for Scotland. Alex Forbes was capped 5 times in the forties before gaining more as an Arsenal player, goalie Jim Brown gained a solitary cap just after the ’74 World Cup and recently Gary Naysmith earned ten caps as Sheffield player.
Eddie gained eight of his nine caps under Tommy Docherty including the games in Brazil in 1972, however it was his ninth cap where the wheels fell aff the barra as Scotland lost 5-0 to England in Willie Ormond’s first game in charge and that was all she wrote for Eddie, however he would go on to play for Sheffield for several seasons before heading to sunnier climes and playing for Detroit Express and the Washington Diplomats in America.
One of the photos is from Eddie’s days in the NASL and the other is from a recent Sheffield United 125th anniversary night. Eddie is pictured with Scotland Coach Stuart McCall, on the far left is Alan Woodward and to the right the maverick that was Tony Currie. Eddie is being presented a special Scotland cap to recall his days as a Scotland player. 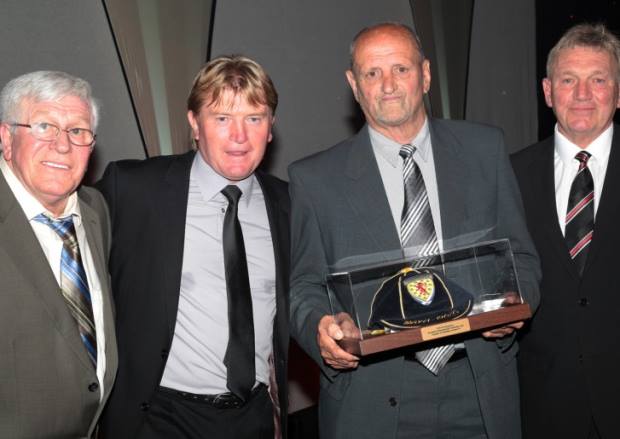 Apparently, Woodward, Currie an Eddie were once part of a famous United chant. “We ain’t got a barrel of money but we’ve got Woodward and Currie, and with Eddie Colquhoun, promotion is soon, United”
Happy Birthday Eddie and all the best.