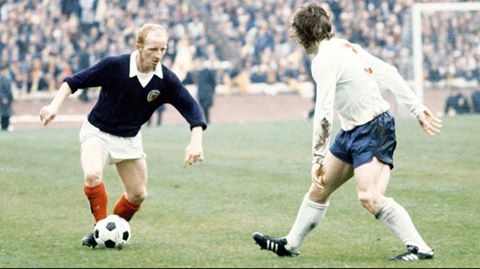 Since you asked David, here is a photo from my first Scotland game. Us v the Auld Enemy at Hampden 1974, I was 14 years old and it was a great introduction to international football and the home championships as we won 2-0. I went with my older brother John and I remember getting to central station to get the train to Mount Florida and it was crammed with Scotland fans carrying the entire contents of Agnews (there’s always change at Agnews). We queued down Hope Street and up through the tunnel onto platform 12 (as it was then) for the football special to keep us away from the normal travellers. There was one guy next to us in the queue from London wearing a West Ham scarf. The banter toward him was good natured in a vicious and cruel kind of way but he just grinned all the way through with the type of fixed grin that says, “please don’t kill me “. He was with his pals who were Glaswegian so he was okay, although they were quite happy to join in the relentless onslaught. Anyway the game was brilliant and Joe Jordan’s opener was going wide before Pejic slid in and knocked it into the net for him, then Shilton stood by to let Dalglish score accidentally when all he was trying to do was cross it. Seriously though, there were two great teams on the park that day and I don’t think we will ever see the like again.

Alan Cross commented ”  My first Scotland game as a 9 year old. My dad took me on a bus from the St Mirren Supporters club. I sat on a crush bar right up the back of the Rangers end and almost fell off when the teams came out, had never heard a noise like it. “

Alec Horsburgh added ” It was only after this game that I really knew what Scotland v England meant..My first real memory of the game was 1973 and watching that Shilton save from Dalglish at Wembley…Live games on TV were an event back then and throughout the 70’s the Auld Enemy game was an appointment to view. My first live expereince of the match was Wembley 1979 and a 3-1 England win. I remember being on the Football Special heading out of Kings Cross and a London City Gent with pin striped suit, bowler and briefcase flicking the V’s at us as the train pulled out of the station…Never say they don’t like to beat us as much as we like to beat them !”

Hamish Husband said. “74 was my first victory against the Auld Enemy, 3 defeats & 2 draws. What an atmosphere. We were going to West Germany & they weren’t. Only 94,000 at the game. Jimmy was amazing, would love to see the whole game again.”