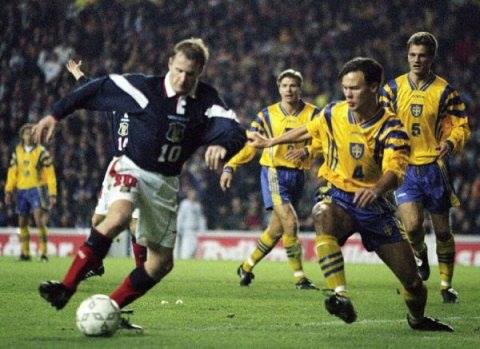 Happy Birthday John McGinlay who will be 52 today. John played for Scotland thirteen times but it took him 14 years as a player to get to Burnden Park, Bolton, where he made his mark and another two to be capped for Scotland.
John’s journey started as a sixteen year old at Highland team Fort William in 1978, in the following years he would play for Nairn County (twice), North Shore in New Zealand, down South with Yeovil, then back up to play with Elgin. A real have boots will travel player. 42 goals in 60 games for Elgin led him to sign for Shrewsbury in 1989 and from there to Bury, and then to Millwall and finally to Bolton!
John signed for Bolton in 1992 and in 192 League games he would score 101 goals and rather fittingly would be the last player to score at the old Burnden Park before the Wanderers moved to the Reebok.
Craig Brown brought John into the Scotland squad in April ’94, having missed out in USA ’94, Brown was looking for players who would take Scotland to the next finals. John started against Austria in Vienna in a friendly and opened his account 35 minutes into the game to equalise after a fine run by Gary McAllister. Billy McKinlay would hit a peach of a goal in the second half to give Scotland the win. John would be replaced in the second half by fellow Highland League export Duncan Shearer for his debut

Next up a friendly against the Netherlands a month later, which Scotland lost 3-1 with McGinlay again coming off for Shearer, who would score Scotland’s late consolation goal.
John next played in Scotland’s second game of Euro ’96 qualifying against the Faroes and indeed would play in their next five qualifiers. He opened the scoring against the Faroes in October ’94 in only four minutes and Scotland managed another four to win 5-1 that night.

John played in the draws against Russia, home and away and in the defeat to Greece and also in the victory over San Marino in Serravalle. He and Billy McKinlay did the double once more in June ’95 in Toftir as Scotland beat the Faroes 2-0.
John then seems to slip out of things, with a rejuvenated Ally McCoist returning to the Scotland scene, scoring within a minute of his return against Greece in August ’95. Coming on as a sub more than two years after being out of the Scotland side.
Cap 8, would come against Sweden in a friendly in October ’95 where he was given the first forty five minutes. Scotland were defeated two nil but John and Sweden would have a date with destiny a year down the line.
Euro ’96 came and went without John’s presence but he was brought back into the team for a World Cup Qualifier against Sweden at Ibrox in November, ‘96. Ibrox erupted eight minutes into the game as Tom Boyd floated a long ball forward which Darren Jackson dummied, leaving John to run in and coolly finish past Ravelli in the Swedish goal.

Truth be told though, this was one of Jim Leighton’s finest games in a Scotland jersey as he time and time again denied them the equaliser. John would then play in the farcical draw against Estonia in Monaco and the 2-0 win over Estonia, down at Rugby Park.
A substitute appearance in the 75h minute against Austria at Celtic Park would be his final game for Scotland. Kevin Gallacher would emerge from this game as Scotland’s first choice striker following a great double as the Scots beat Austria 2-0.
That was it for John and maybe the clue as to what went wrong is in a match report for the final game at Burnden Park, Bolton where the Independent paper states “hero John McGinlay who took a pain-killing injection to play at the possible sacrifice of a place in Scotland’s squad to play in Sweden next week”.
John would soon leave Bolton for Bradford and then Oldham only achieving 7 League games for either but netting 5 and 4 goals respectively, which would suggest injury was preventing him from playing. John’s playing days would soon be over although he did have two short stints in Cincinnati plying his trade their too.
To me John is a real hero; someone who took the long way round to get to the International stage and reach the peak of his career and we will always have that moment at Ibrox to savour. Happy Birthday John and all the best. (John’s first game against Austria and the Sweden goal will be posted on the page shortly, remember to check it out.)