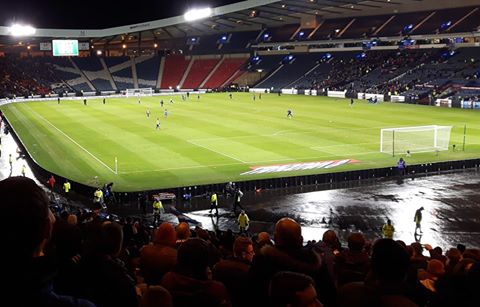 Since the Scotland v Denmark friendly at Hampden last Tuesday there’s been a bit of debate about the state of our game, the size of the crowd, the (lack of) atmosphere, the state of the national stadium, should we move to a rugby ground, should we build a new stadium in Central Scotland, should we even have a national stadium at all or should we move to club grounds around the country. Then there’s the usual should WGS have been kept on, should he pick/play this player or that player or a different formation – it goes on and on.
Now regarding the national stadium, I like goin to Hampden; it holds a lot of great memories for me, and some terrible ones. I might be a wee bit selfish though because I live in Glasgow so naturally it’s easy for me to get there. Admittedly it could be a better shape and we could be doin with getting rid of the runnin track but I would much rather that we spent money developin young talent than developin another stadium, whether that is Hampden or a totally new one.
Like I say, Hampden holds some great memories of fantastic games where the place is absolutely rockin and the atmosphere is electric, unfortunately Tuesday night was not one of them. Five minutes into the second half I was wishin I was the type of supporter that left games early, but I didn’t, I stayed to the end of that borin drudge fest. The best thing about the match was the banter from the fans around me in the west stand, and the best move of the match was more prophylactic than professional. Yes that’s correct, half way through the second half the tedium was relieved when somebody blew up a condom, and you know just how borin the game is when the focus of a large section of the ‘crowd’ is on how long we can keep a Johnny bag floatin in the air (ten minutes by the way).
There was all that “Wwwwwwwwooooooooooooooh” as it gently floated down toward our heads and then a joyful “ Yaaaaaayyyyyyy” as someone batted it back up. The Denmark players on the park, if they could hear us, which they probably could due to the lack of other chantin or singin, must have been thinkin to themselves, “what are they getting so excited about, it’s only another throw in/free kick in the middle of the park.” While the Scots were thinkin, “Och no another f<@‪#‎in‬ Johnny.” Ten solid minutes of puerile entertainment. So for that reason my man of the match award for the Scotland v Denmark friendly goes to Mr Jonathan Bag.

Hamish Husband added this too.

The history of the stadium is rather unfortunate, the withdrawal of the money by mrs T in 1980 was criminal. Backed by Rangers as they were in the process of building a new Ibrox. The south stand should have been extended round the ground. It is not even a running track! It is our national stadium, full stop