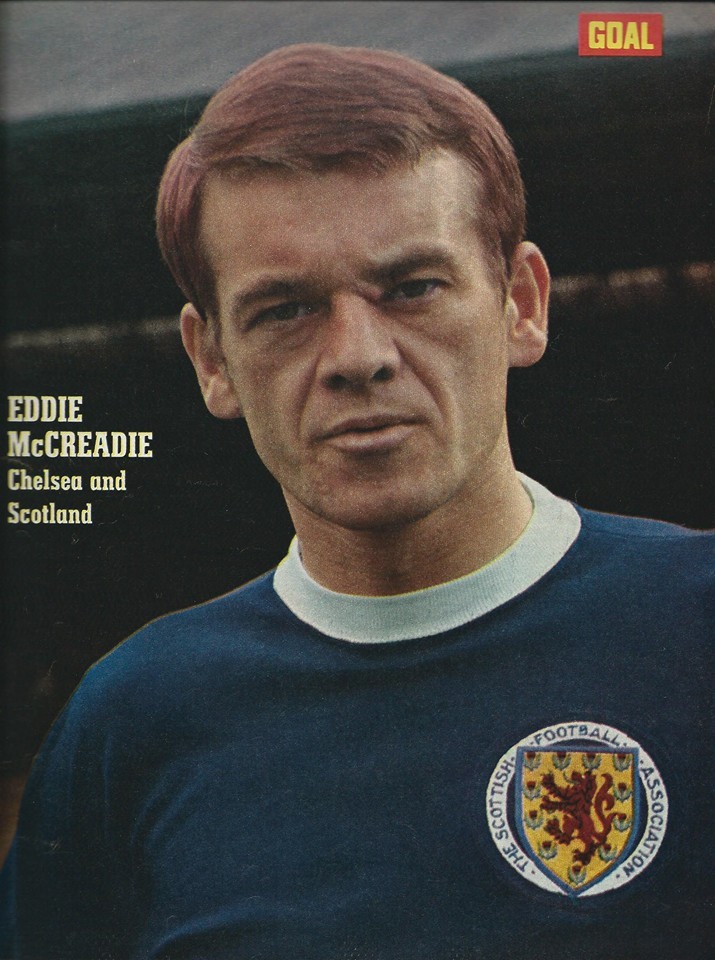 Eddie McCreadie will celebrate his 76th birthday today. I suppose as a card collector it’s no surprise Eddie was one of my early heroes, as he was one of the Anglo cards in all the early cards series I collected. Although in saying that, so was Tommy Craig and he was never a hero for me.
Chelsea were one of the cool clubs at the tail end of the swingin’ sixties and Eddie along with Charlie Cooke made them one of my favourite teams at the time. The thing was Eddie always looked so mean in his pictures, never one to smile, he was more of a scowler.
Eddie played over 350 games for Chelsea and was signed by Tommy Docherty in 1962 for £5000 from East Stirling.
Eddie was first capped by Ian McColl in April 1965 against England at Wembley. The game was played in front of a crowd of 98,199 (Couldn’t possibly have been 98,200 then for God’s sake!). Scotland went two down in the first half but Denis Law scored just before half time and Ian St. John equalised just before the hour mark and that was how it remained. Having beaten England three times on the trot I imagine some in the Scotland camp were quite disappointed at this result.
Eddie would play in the next five games with Jock Stein taking over the reins a month later after McColl quit to manage Sunderland. The first three World Cup qualifiers came in this period; the first two away with a one each draw with Poland being followed with a 2-1 victory in Helsinki over Finland. Then came two defeats a 3-2 loss to Northern Ireland in the Home Internationals in Belfast followed by the disastrous 2-1 defeat to Poland at Hampden. Billy McNeill had given Scotland an early lead but two goals in the 84th and 86th minute saw Scotland’s hopes of qualifying for England 1966 crumble.
Eddie would miss the last gasp victory over Italy at Hampden but played in the 3-0 loss away to Italy in Naples. Stein would quit his caretaker role and Scotland had two managers in quick succession; John Prentice and Malcolm MacDonald. Prentice would bring in Tommy Gemmell for the left back spot and games became more limited for him until on Eddie’s 27th birthday new Manager Bobby Brown moved Gemmell to the right side and played them both. Eddie was 27 on 15th April, 1967 and Scotland beat England 3-2 in that match that will forever be embedded in Scottish football folklore.
McCreadie would play at Hampden the following year in the game against England that was the decider for Euro Nations Cup qualification, which Scotland drew 1-1 and thus failed to progress to the quarter finals.
McCreadie started in Scotland’s first four games for Qualification for Mexico 1970. They started well with a 2-1 victory over Austria at Hampden with Denis Law and Billy Bremner scoring for Scotland. This was followed by the 5-0 crushing of Cyprus in Nicosia with Alan Gilzean and Colin Stein grabbing doubles and Bobby Murdoch getting the other.
If Scotland had any real chance to progress they had to overcome World Cup Finalists West Germany and faced them at Hampden in April 1969. However, it was too big an ask and a Gerd Muller goal in 39th minute made it near impossible. Bobby Murdoch would pull one back in the final two minutes but it was not to be.
Scotland and Eddie had mixed fortunes for the Home International Series of 1969 with a 5-3 win over Wales in Cardiff, followed by a 1-1 draw with the Irish at Hampden and finally a crashing 4-1 defeat to England at Wembley.
Colin Stein the scorer of Scotland’s solitary goal that day was in the middle of a 5 game consecutive scoring run which is still a record for Scotland. Mo Johnston would do similar for Scotland in consecutive World Cup qualifiers in 1988 – ’89 but his failure to score in a friendly against Italy in late ’88 counts against him in terms of the record.
Of course, Colin would score four in the one game against Cyprus as Scotland cruised to an 8-0 victory at Hampden but for Eddie this would be his last Scotland game. He would continue to play for Chelsea for another four years before going into management at Stamford Bridge and then in America.
Happy 76th birthday Eddie and all the best.