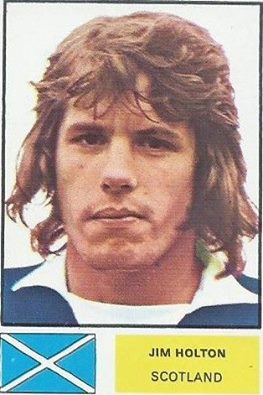 It’s one of those sad things that when a players passes away prematurely when do you celebrate his time with Scotland. Had he lived, Big Jim Holton would have reached the age of 65 today but sadly Jim passed away from a heart attack he suffered at the wheel of his car on the 4th October, 1993.
For anyone who followed Scotland in the 1970’s Big Jim was a true hero and yet he only played 15 times for his country and only over a 17 month period, first playing in May 1973 against Wales and his final game came against East Germany in October, 1974.
It was Jim’s headed goal that brought us back into the game after the shock of conceding to Czechoslovakia in that vital World Cup Qualifier in 1973 before Joe Jordan sent us all delirious with the winner in the second half and Scotland on their way to the World Cup.
Jim played in all three games in the ’74 World Cup at the heart of the defence but sadly shortly after Germany; Jim suffered two sepearte leg breaks and faded from the International scene but for those of us of a certain age Big Jim will always be with us. So here’s to Jim and remember ” Six Foot Two, eyes of Blue, Big Jim Holton’s after You