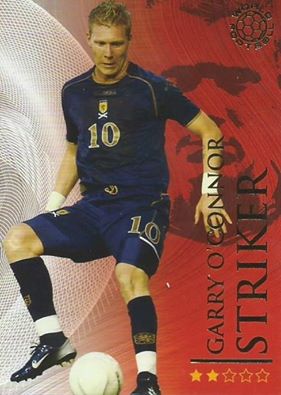 Happy Birthday to Garry O’Connor who will turn 33 today. In terms of talent Garry had a bundle and would be capped 16 times for Scotland, scoring 4 goals but sadly he was never to reach his full potential.
Garry’s first cap came under Berti Vogts against Nigeria on 17th April, 2002 up at Pittodrie. Garry would come on as a sub late in the game for Steven Thompson. Also making their debuts that night were Rab Douglas, Robbie Stockdale (remember him?), Kevin McNaughton and Gareth Williams, who would be substituted by another new cap Michael Stewart. Other than Garry only Douglas would make double figures in appearances.
Christian Dailly would score early on for Scotland but this was in an era where we never won friendlies at home and once again we were found to wanting as Nigeria scored twice to make it 2-1.
Garry would play twice more under Berti in the Far East tour of 2002, starting against South Korea in a 4-1 defeat and then coming on as a sub for Kevin Kyle in the last ten minutes of that thrilling game against the Hong Kong X1, which we won 4-0. Of course, this was when James McFadden decided to go AWOL and missed the flight home, Garry would pull a similar stunt a few years later.
Walter Smith recalled Garry to the Scotland squad and brought him on as a substitute in his first game in charge a 2-0 defeat to Italy in Milan in a World Cup Qualifier in March 2005. Garry would be given a starting berth in a friendly against Austria in the Arnold Schwarzenegger Stadium in Graz in August 2005. The Scots got off to a great start with a goal in three minutes from Kenny Miller followed by a second from Garry in 38 minutes. Sadly we would lose two goals in the second half to draw the game. This was followed up by a sub appearance against Slovenia in that classic 3-0 away win and then a start in a one all draw with USA at Hampden.
By the time of his 8th appearance Garry had left Hibs and joined Russian club FK Lokomotiv Moscow, with hindsight perhaps not the best choice for Garry and indeed would be a challenge to many a young player from the UK, I imagine.
Garry came on as a second half sub against the Faroe Islands in September 2006, scoring the last goal in the 6 nil drubbing at Parkhead. Garry also came on in the France game at Hampden in October that year a few minutes after Gary Caldwell had scored that memorable goal.
From here it went a wee bit downhill; Garry failed to turn up a few days later to meet with the squad as they were due to fly out to Ukraine, later claiming it was for family reasons. Walter Smith would not pick Garry again.
However, the installation of Alex McLeish as Scotland manager gave Garry a way back in. Alex had been manager of Hibs previously and had actually given Garry his debut there. Garry was recalled to the squad in May 2007 and would once more play in Austria in a friendly. This time Garry would score the only goal to give Scotland victory. He would follow this up a week later in a 2-0 win in the Faroes scoring the second goal, shortly after Shaun Maloney had put Scotland in front.
Shortly after this Garry joined Birmingham City and like a lot of us I hoped this would be the making of Garry and his full potential would be realised. Sadly, it was not to be, Garry would suffer niggling injuries throughout his time with Birmingham; it would also see his issues with drugs and alcohol become prevalent.
However, he was still able to gain the last five of his sixteen caps in his time at St. Andrews. Alex McLeish gave him a starting place in a rare friendly 1-0 win with South Africa, Kris Boyd would score the only goal at Pittodrie in August 2007.
Garry would start in the first of a September Euro double header against Lithuania with Scotland winning 3-1 at Hampden. He was to be sub again, a few days later in that great night in Paris coming on for goalscorer James McFadden late the second half. A month later at Hampden he would come on for Faddy again with ten minutes remaining in the 3-1 win against Ukraine.
It would be almost two years later in September 2009, Garry would make his last Scotland appearance coming on for the last ten minutes against Holland in a World Cup Qualifier. George Burley would be in charge for this one nil defeat.
That would be it for Garry and spells at Barnsley, Hibs, Tom Tomsk in Russia and Morton would follow. Garry would then move to Lowland team Selkirk FC in 2014, where he is currently the player / manager.
Happy Birthday Garry and all the best for the coming year.
David Stuart