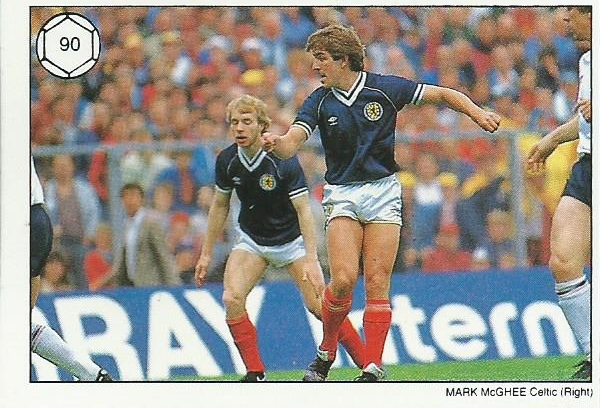 Happy Birthday to Mark McGhee. Mark will turn 59 today; his Scotland career was quite brief lasting only four games from June 1983 to May the following year. Mark was of course a big part of Aberdeen’s success in the early ‘80’s under Alex Ferguson. Jock Stein picked him for Scotland’s summer tour of Canada in 1983. It is rather surprising that during this three match venture that he would be the only new cap; although some of the players like Gough. Leighton, Bannon and Nicholas only had a handful of games beforehand.
Mark came on in the 37th minute of the first game against Canada in the Empire Stadium, Vancouver after Charlie Nicholas sustained an injury. Scotland were one nil up after Nicholas had been brought down by the Canadian goalkeeper moments before and Gordon Strachan had converted the penalty kick. Mark would score the second goal in the 75th minute as the Scots ran out 2-0 winners. I am pretty certain this is the first occasion that Scotland ever played on Astroturf.
Mark started the following game of the tour but was substituted just after half time making way for Andy Gray, then of Wolves. Scotland would win 3-0 with goals from Nicholas, Gough and Souness.
Mark wouldn’t get back into the side until December of that year as Scotland faced Northern Ireland in the Home Internationals. This game featured Doug Rougvie in his only international appearance and when Mark replaced Frank McGarvey in the 60th minute there were six Aberdeen players in the side. Sadly, it didn’t help too much as Scotland got skelped 2-0.
In the final game of the series and indeed Mark’s final game; Scotland played England at Hampden in May and Mark was given a starting place and would score the opening goal of the game in the 13th minute. Tony Woodcock would equalise before half time and the game would end 1-1. Mark was replaced in the 62nd minute by one of the players that would edge him out to of the Scotland team; Watford’s Mo Johnston making only second appearance in a Scotland strip.

So Mark would score two goals in four games and even at that without completing a full game. His goal tally was still better than the likes of Graeme Sharp, Alan Brazil and David Speedie from around the same time.
After Aberdeen, he would move to Germany and play with Hamburg for a season before returning to Scotland and Celtic. He followed this up with another spell at Newcastle, then a three game spell at IK Brage in Sweden and finishing up his playing days at Reading.
Mark would then go to manage at many a club and indeed now manages Motherwell as well as doubling up as an Assistant Manager to Gordon Strachan.
Happy Birthday Mark and I know it goes against the grain but try and crack a smile too but no that grim scary one though.
Mark will also be added to the Scotland Players abroad section on the website soon, although I doubt if I’ll ever get a photo of him with IK Brage!