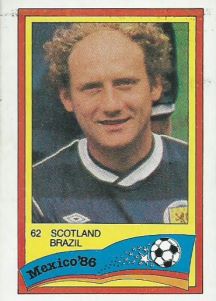 Alan Brazil will turn 57 today. Alan, of course started out at Ipswich Town in the same side with George Burley and John Wark under Bobby Robson in the late 70’s. He would win 13 caps altogether and like many a Scottish International striker around that time would prove a failure on the International front.
His first caps came on a European two game tour in late May 1980. He was given 45 minutes in Poznan, Poland coming on for Joe Jordan. Scotland would lose 1-0 with the great Zbigniew Boniek scoring the only goal. Full back Ally Dawson of Rangers gained his first cap that day too coming on for George Burley in the last ten minutes. As for Alan, he was given a starting berth by Jock Stein three days later in Budapest, however he would come off at half-time and be replaced by Gordon Strachan. Scotland lost 3-1 with Steve Archibald netting for the Scots.
It would be February 1982 before Alan was back in the team as Scotland played host nation Spain in a pre-World Cup match in Valencia. Scotland would lose 3-0 but Brazil would be on the winning side in the next game. Scotland beat Netherlands 2-1 at Hampden in March ’82 with first half goals from Frank Gray and Kenny Dalglish. Brazil would replace Dalglish at half time and making their debuts that night would be Jim Bett of Rangers and Allan Evans of Aston Villa.
Stein must have been impressed by Alan’s efforts that night as he would play the full ninety minutes in each of the Home Internationals that year. Club teammate John Wark would score for Scotland in the first game at Windsor Park, Belfast before Sammy McIlroy would equalise for the Irish to gain the draw.
Next up a 1-0 victory over Wales at Hampden with Asa Hartford scoring the last of his five Scotland goals in the 7th minute with Brazil providing the through ball. The final game of the series against England was a dour affair with Paul Mariner providing the only goal of the game for the visitors at Hampden.
Alan would be given a starting place in Scotland’s opening game of the World Cup lining up alongside Kenny Dalglish in attack against New Zealand. Dalglish would open the scoring and once more John Wark would get among the goals with a brace all coming in the first half. Slackness in the Scotland defence saw their lead reduced to one soon after half time. John Robertson, then Steve Archibald who had come on for Brazil in the 53rd minute finished the scoring.
Archibald was then given the nod ahead of Brazil for the Brazil game and indeed Alan perhaps, ironically would not feature against his namesake team at all but would return to the side as a late substitute as Scotland looked for a winner against the USSR, to no avail.
After the World Cup, he played in the opening two games of the 1984 Euro Qualifiers; a 2-0 defeat of East Germany with Wark and Paul Sturrock scoring and also a 2-0 defeat to Switzerland in Berne.
Alan would only feature twice more for Scotland and both would be in the 1983 Home Internationals. He would score his only International goal down at Ninian Park, Cardiff as Scotland won 2-0 with Andy Gray scoring the other goal. By this time Brazil was a Tottenham Hotspur player.

He would come on as a sub for Eamonn Bannon in the second half as Scotland toiled to a 2-0 defeat to England at Wembley and that would be his final appearance.
His time at Tottenham was not a particular successful one and he moved on to Manchester United where a recurring back injury hampered his progress and as his injury worsened he had stints in Australia and Switzerland before retiring. Alan does feature in our Scotland Players abroad section on the website as in his early days at Ipswich, he was loaned out to NASL club Detroit Express to gain some experience. Of course, Alan continues to work on Talksport where he is more than happy to give his opinion on anything and everything.
Happy Birthday Alan and all the best.