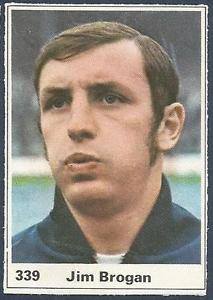 Unlike Ferris Bueller, I’ve decided to forego June 5th as a day off to bring you some birthday greetings. Like May 23rd, June 5th is perhaps not the best day to be born if you’re hoping to have a good Scotland career, however, there is perhaps a silver lining on its way.
First of all Happy Birthday to Jim Brogan, ex-Celtic full back Jim will be 72 today. Jim played four times for Scotland and was never on a winning side. All of his appearances came in the final months of Bobby Brown’s tenure as Scotland Manager.
His first cap came in April 1971 in Scotland’s second game of the 1972 Euro Nations Qualifiers. By this point Scotland had already lost to Belgium away (go figure) and now faced Portugal in Lisbon. Brown was struggling at times to field a full strength side due to the reluctance of the big English teams to release players; so increasingly his sides featured more and more home based players. Brogan made his debut at left back replacing his Celtic teammate Tommy Gemmell but with Celt David Hay at right back. Also making their debuts that night were David Robb of Aberdeen and from the subs bench Drew Jarvie of Airdrie would make an appearance. Scotland lost 2-0 through a Pat Stanton own goal and one from the legendary Eusebio.
Jim retained his place for the May Home Internationals, even with the return of players from Leeds United, Derby County and Arsenal, that started with a 0-0 draw down at Ninian Park , Cardiff against Wales. This was followed by a one nil defeat to Northern Ireland with John Greig scoring the only goal at the wrong end. Jim’s final game was against England at Wembley with John Greig partnering him on the right. A poor Scotland side lost 3-1 with Hugh Curran of Wolves providing the only bright spot for Scotland.
That was it for Jim as the likes of John Brownlie of Hibs and Sandy Jardine of Rangers began to make their mark in the team. Jim would of course play for Celtic for a few more years and then move on to Coventry City and briefly Ayr United. Interestingly, in an old issue of Shoot magazine form the early 1970’s they did a feature on things people don’t know about football players or something along those lines. For Jim, it was the fact he was reckoned to be a millionaire due to some wise investments in the hotel business. Happy Birthday Jim. 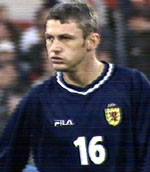 Also celebrating today is Andy McLaren who will be 43 today, a man with his demons but who has fought back from issues of abuse, drugs and alcohol and has now earned the respect of us all for his charity work A&M Scotland that uses football and coaching as a way of diverting young people from involvement in gangs and violence. Andy only ever gained one cap for Scotland and it came as a Kilmarnock player under Craig Brown in a 1-1 friendly draw away in Poland. Charlie Miller once said that he and Andy only really have one cap between them as Charlie played for the first 55 minutes of that game and Andy had come on at half time and would only play 45 minutes in total for his country.
Here’s to Andy; all the best and keep up the good work. 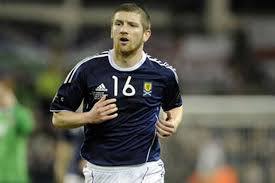 Mark Wilson is another one with a brief moment in the Scotland limelight and he will be celebrating his 32nd birthday today. Mark is one of those players that represented Scotland at all the Youth Levels gaining 19 caps at under 21 level and captaining the team as well and failed to progress to full International successfully. Fifteen of those caps came with Dundee United and the other four with Celtic. He would gain one cap in 2011 coming on in the 57th minute for Phil Bardsley in a Nations Cup game (remember that) in which Scotland were winning 3-0 thanks to goals from Kenny Miller, James MacArthur and Kris Commons against Northern Ireland. The final score would remain 3-0 in the Aviva Stadium, Dublin.
After leaving Celtic in May 2012, Mark has more or less drifted out the game and was seen playing for Dumbarton in 2015 before eventually announcing his retirement. Happy Birthday Mark. 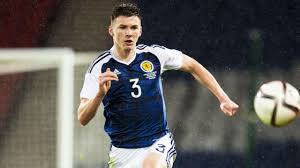 So, overall June 5th not a great day for Scottish players to be born on, however there is one more player who will turn 19 today and will hopefully have a better Scotland career than those of the others put together. Kieran Tierney is the player in question and although he only has the one cap which involved a 45 minute run out against Denmark in the recent International; his displays last season with Celtic gives us all hope that in he will be a future Scotland star. If only he was a right back, instead of left where we seem to have a surfeit of good players.
Happy Birthday Kieran and all the best.