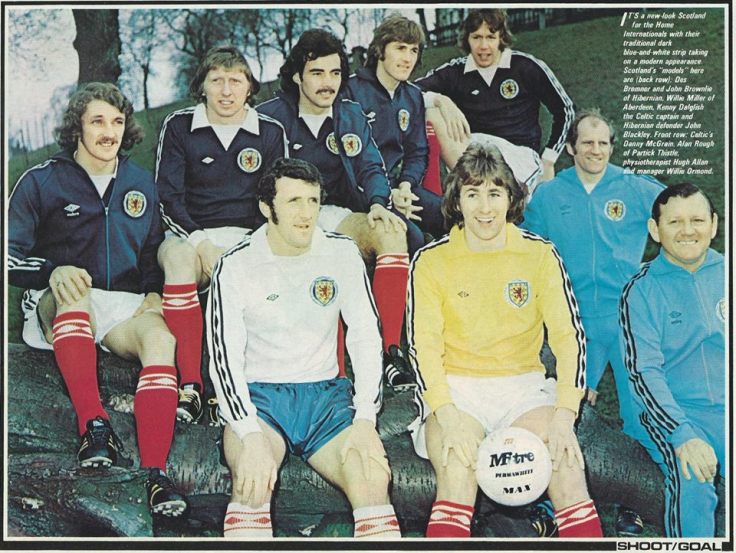 While we’re looking back on strips; this was among the best. We posted this one last year too.
“It’s a new strip launch, so who can we get to pose for it?”
“Well, we’ll no get any guys from down South, so let’s get some locals in.”
“Jock Wallace has told us to f#‪#‎k‬ off, we’re no getting any of his players but Celtic’s sending McGrain and Dalglish.”
What aboot Hibs can they send anybody and get that big poof Rough, he wisnae too bad against the Swiss. Noo is there anybody else?
“Eh, Willie Miller’s hingin’ aboot for a disciplinary, what aboot him?”
“.Willie . . .who?”
“Miller, he plays fir Aberdeen, the boss is thinkin’ of playin’ him soon again.”

I’m not sure if that’s how they go about a strip launch but I imagine in the mid-70’s it’s a fair summary. This classic strip was launched for the 1976 Home International Series
As for the players in the line-up, it’s a bit cruel in some ways. Des Bremner of Hibs would only get to play against Switzerland a month before this, coming on in the 64th minute and despite being an ever present in the Aston Villa 1980-81 Championship winning and also taking part in their European Cup winning exploits; 26 minutes for Scotland was all he got.
As for John Brownlie, all that fighting back from injury to gain a place in the team was to no avail as he will never wear this strip on the field of play having won the last of his eight against Romania in December 1975.
Willie Miller is a strange one, I suspect he was in the squad for the Switzerland game before the Home Internationals of ’76 and although he had won his first cap against Romania in June 1975, he would have to wait until 1978 for his next one.
King Kenny doesn’t need to worry as he’s got a few games to go for the team. John Blackley not so much, as he would only play in another three games but John will always have Zaire and Dortmund to look back on.
Danny McGrain would also go on to play many a game for Scotland. Finally there’s big Roughie and no wonder he’s chuffed, he’s finally got his big chance against Switzerland and would hold on to the goalkeeper’s jersey for a long time yet.
Willie Ormond would continue as Scotland manager for another year before resigning and moving to Hearts. I always find it funny when you look at team photos and the physiopherapist is always there. There’s never seems to be a coach or assistant coach just always the physio. I wonder if Hugh Allan has a sponge at the ready in his right hand.
It says in the caption it was a new look Scotland for the Home Internationals. Scotland would win the Championships that year at a canter beating Wales 3-1, Northern Ireland 3 nil and finally beating England 2-1 with Dalglish putting through the legs of Clemence for the winning goal.