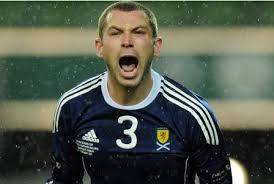 Happy Birthday to Phil Bardsley who will turn 31 today. Phil has gained 13 caps so far, all with Sunderland. It’s fair to say he is not favoured by Gordon Strachan at all, 12 of his caps came under Craig Levein gaining his first against Spain at Hampden in October 2011 when Scotland lost out to a late goal to lose 3-2.
Strachan has rarely picked Phil for his squads and has only given him 23 minutes of playing time against Poland in the friendly win in Warsaw 2014. Phil only played 11 times for Sunderland last season and it will be interesting to see if he’s picked much by Club Manager Mark Hughes or International Manager Strachan next season.
Happy Birthday Phil and all the best.