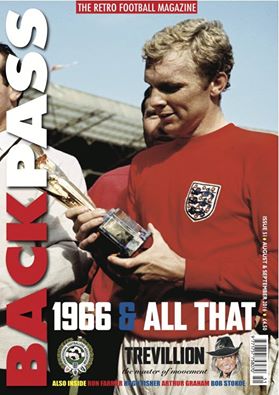 Oh dear can’t believe I’m going to post this cover. Yes, folks I’m about to recommend the latest issue of Backpass which gives a mention of two of our Southern neighbours minor cup success a long, long time ago and a galaxy far away.
If you can get past the cover though, there are some articles on Scotland including one by Jim Thornton on Scotland’s World Cup campaign for ’66 which ended in defeat in Naples to Italy.
Craig Brown has an article each month and this month it’s about Berti Vogts aka the Coca Cola Man. It seems that during the 1986 World Cup, Berti Vogts as German Assistant Manager dressed as a Coca Cola vendor to spy on Scotland during their training sessions. Craig does mention Berti’s failure in managing Scotland and suggests that communication may have been a big part of it.
There’s also an article on Arthur Graham who claims to have thought that Maradona was the Argentine mascot at the famous friendly game in 1979, so small and stockily built was Diego. He also talks about his club career too.
As I say it’s quite a good issue with some Scotland stuff but that damn front cover!