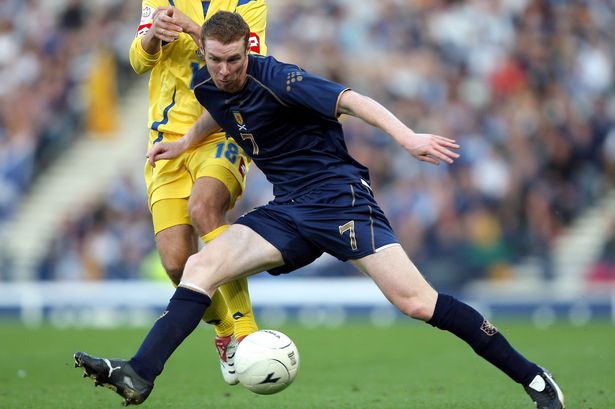 Happy Birthday to Stephen Pearson who will turn 34 today. Pearson was first capped as a Motherwell player in November, 2003 coming on in the 71st in one of Scotland’s biggest games in this period for Neil McCann in the 1-0 victory over the Netherlands in the first leg of the play offs for the Euros 2004. Stephen was perhaps fortunate that he missed the return leg but won his second cap as a Celtic player in February, 2004 in Cardiff, Wales where Scotland lost 4-0. Pearson himself was substituted at half time.
In his next three games, he was to return to being on the subs bench coming on for the final seventeen minutes against Hungary at Hampden in August 2004. Scotland were already three down at this point and that’s how it finished. A month later and he would be a half time sub for James McFadden but would only play 14 minutes as the game in Spain was abandoned due to a floodlight failure caused by a thunderstorm. The game was tied at 1-1 at this point.
His final appearance under Berti Vogts was against Norway as Scotland lost 1-0 in a World Cup Qualifier at Hampden in October, 2004. Pearson came on in the 63rd minute for Richard Hughes (who remembers him?) of Portsmouth.
Tommy Burns would pick Stephen in his only game in charge; a rather disastrous 4-1 defeat in Sweden in November, 2004.
Cap number 7 would not come until August, 2007 and he would now be a Derby County player. In the intervening years Stephen struggled with injuries and failed to get a regular place in the Celtic side but the move to Derby County seemed to reinvigorate his career once more. Indeed Stephen had scored the only goal in the 2007 Championship play off to give Derby a place in the Premiership. It was Alex McLeish that brought him back into the Scotland squad and he was a sub in the 1-0 victory over South Africa up at Pittodrie, coming on once more for McFadden at half time.
His next game was in September, 2007 in the Parc De Princes in Paris. I imagine as Stephen came on in the 26th minute for an injured Darren Fletcher we all thought “well there goes our chances of maybe getting a draw here”. Of course, James McFadden hit his stunner in the 64th minute and suddenly we all dreamed of a victory. Stephen like the rest of the team worked tirelessly all that night to ensure that Faddy’s magic moment would seal victory.
Stephen would retain his place for Scotland’s next match; that wonderful 3-1 victory over Ukraine at Hampden with early goals from Kenny Miller and Lee McCulloch giving us the perfect start and although Shevchenko would pull one back in the 24th minute. Another magical finish from Faddy saw us win 3-1. (I will post the video of the game straight after I post this so look out for it.).
However, Stephen would only gain one more cap, his tenth and final one in Tbilisi, Georgia as the Scots crashed 2-0 and their chances of qualification to the Euros in 2008 fell apart. A story that of course repeated itself recently.
And that was it for Stephen as once more injury and subsequent loss of form would see him struggle to get a place in the Derby side and he would move on to Bristol City under Derek McInnes a few years later and then to the Indian Super League with the Kerala Blasters.
Stephen returned to his first club Motherwell last season but has now returned to India to play with Atletico Kolkata. Injury robbed him of a lot of his career and at times it did look as though he could become a valuable player for Scotland but sadly it was not to be.
Happy Birthday Stephen and all the best.