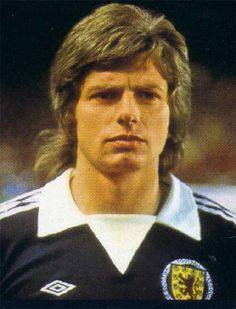 Happy Birthday to Willie Donachie who will turn 65 today. Willie played 35 times for Scotland from 1972 until 1978. It was Tommy Docherty who gave the Manchester City left back his first cap playing against Peru in 1972 in a friendly at Hampden in April ‘72. Scotland would win 2-0 and Donachie would play in two of the Home internationals that year and then all three of the Brazilian Independence Cup games. Initially partnered with John Brownlie of Hibs and then with Alex Forsyth of Partick Thistle.
Willie would play in Willie Ormond’s first game in charge; the disastrous 5-0 defeat to England. He would survive the cull of the defence from that game and lined up alongside Danny McGrain, making his debut to face Wales at Ninian Park in May 1973. Although Willie played against Northern Ireland a few days later, an injury suffered in this game would mean he would miss the England match a few days later.
Fate would deal Donachie a cruel blow in some ways as his replacement for the England game was to be Sandy Jardine and so the Jardine / McGrain pairing was born. Effectively this meant that over the next few years he would gain very few caps and at times with the likes of Forsyth, Stewart Houston and Frank Gray being capped ahead of him, it seems like he was the forgotten man.
However, Ormond would recall him for the 1976 Home International series that saw Scotland win all three games and from then on Donachie was the first choice left back. By September, 1977, Donachie had 26 caps but would be injured for the World Cup clash against Czechoslovakia that month and was replaced by Sandy Jardine.
Whether or not Ally MacLeod would have toyed with the idea of retaining the Jardine / McGrain partnership is unknown for a serious injury to McGrain would leave him out of the side for just over two years. Willie returned to the side for that memorable night in Liverpool as Scotland beat Wales 2-0 to qualify for the World Cup in Argentina.
Willie would miss the opening game of the World Cup due to suspension but returned for the dreadful draw against Iran and would also play in the victory against the Netherlands.
After the World Cup, Willie would play in the opening two games of the 1980 Euro Qualifiers, a 3-2 defeat to Austria in Vienna, in what as Ally MacLeod’s last game in charge and a 3-2 win over Norway at Hampden; Jock Stein’s first game as Manager.
His final Scotland game would be in November, 1978 as Scotland took on Portugal in a Qualifier in Lisbon. He replaced Frank Gray in 65th minute and this was to be his last hurrah as Stein would then continue with Frank Gray and then Iain Munro and so Donachie never got back into the side.
Willie would continue to play for Manchester City until 1980, he would then have spells in the U.S. with the Portland Timbers, Norwich, Burnley and finally Oldham where he would play until he retired in 1990.
One final thing I can’t go without mentioning, is that Willie never scored for Scotland but he did once score for Wales, skilfully by passing Jim Blyth with a pass back to give the Welsh a late equaliser in May, ’78.
Happy Birthday Willie and all the best.