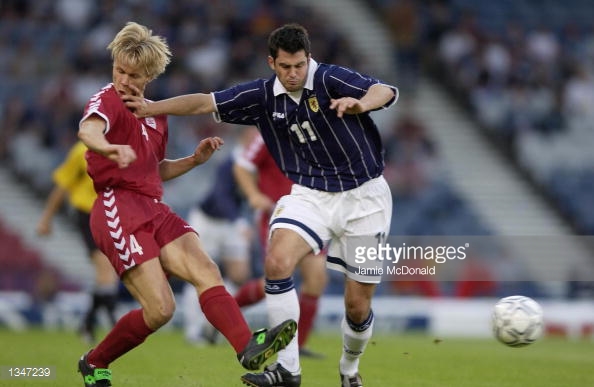 Happy Birthday to Steven Thompson who turns 38 today.
Steven played for Dundee United, Rangers, Cardiff City and Burnley as well as turning out for his home town team of St. Mirren. Steven was also capped 16 times for Scotland scoring 3 goals.
Unfortunately all of Steven’s caps were won under Berti Vogts; so he tasted defeat so much more than victory. His first cap was as a Dundee United player and came on the same night as Berti’s Scotland managerial debut. Which means he took part in a 5-0 humping by France in the Stade De France in March, 2002. Steven would only play for the last 27 minutes coming on for Dunfermline’s Stevie Crawford. Steven would start the next game and played the first 75 minutes at Pittodrie as Scotland lost 2-1 to Nigeria.
However, he would taste victory soon enough as Scotland took on the might of the Hong Kong League Select as part of the Reunification Cup in May, 2002. Kevin Kyle would open the scoring after 22 minutes and Steven would add the second 14 minutes later with Christian Dailly and Scot Gemmill grabbing another two in the second half.
Steven would then play in a 1-0 friendly defeat to Denmark at Hampden in August, 2002. A month later and he would mostly be a spectator as a rather inept Scotland team lost two goals in quick succession to the Faroes in Toftir in a game which they were lucky to escape with a point thanks to goals from Paul Lambert and Barry Ferguson. Steven would play for the last 7 minutes replacing Scot Dobie of West Brom. A bad way to start a Euro campaign.
A month later and Scotland gained a good result in Reykjavik winning 2-0 due to goals from Christian Dailly and Gary Naysmith. Steven’s 7th and last cap as a Dundee United player came a few days later in a 3-1 friendly win against Canada at Easter Road with Stevie Crawford hitting a double and Thompson scoring the other.
Another friendly in February, 2003 saw the Scots lose 2-0 to the Republic of Ireland at Hampden with Steven coming on as sub for Stevie Crawford in the 64th minute. By this time Steven was a Rangers player. With Berti there was always friendlies and in most cases defeats as happened in April, 2003 in front of a sparse crowd of 12,189 as Scotland took on Austria. Steven played in the first half swapping with Crawford at half time but by then all the goals had been scored and unfortunately both had went Austria’s way.
Kenny Miller at this point begins to establish himself in the Scotland team and Steven will start to disappear from the International scene. He does however, make two appearances against Germany in the 2004 Euro Qualifiers. In the home tie v Germany in June 2003, Steven comes on in the 89th minute for Kenny Miller. Miller had scored a second half equaliser to give Scotland the draw.
A few days before the game in Germany in September, Steven was given 15 minutes against the Faroes at Hampden as the Scots ran out 3-1 winners with goals from Neil McCann, Paul Dickov and James McFadden.
As to the Germany game, Steven was given the full ninety minutes in Dortmund. Scotland put in a good performance but came away 2-1 losers. Thompson had set up the Scotland goal in the 60th minute with the prefect cross for McCann to volley into the net. However, Maurice Ross was sent off six minutes later and Scotland’s chances of getting back into the game faded after that. Of course, this is the game that Christian Dailly is heard shouting “Cheats and Divers” during Berti’s post-match interview obviously unhappy with the soft penalty award in the 60th minute for Germany.
Steven would play in a couple of preferably forgotten home friendlies in 2004 as Scotland lost to Romania and Hungary before playing in the last ten minutes of a World Cup Qualifier against Norway at Hampden, which was lost one nil. (Why the SFA allowed Berti to continue at the start of the 2006 Qualifiers is hard to fathom?).
Steven won his 16th and final cap in Chisinau, Moldova in a World Cup Qualifier. Moldova would take the lead in the 28th minute through Dadu but Steven would equalise with a well taken goal in the 33rd minute and that was how it finished in both the game and for Steven.
Steven would go on play for Cardiff City and Burnley before returning home to play for St. Mirren. Steven retired from football at the tail end of last season but is regularly seen as a pundit for the BBC.
Happy Birthday Steven and all the best.