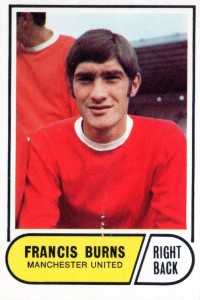 Francis turned 68 today and only ever gained one cap for Scotland in a World Cup Qualifier against Austria in November, 1969. Francis was a left back who was part of the Manchester United side of the 1960’s and although he played six of the matches in the run up to United’s European Cup triumph, he never played in the final.
The game against Austria was effectively a dead rubber as by then both teams had failed to qualify with West Germany going through to Mexico. Scotland had also been caught out with a lot of late call offs and so Burns was given his chance. Hugh Curran of Wolves was also to start his first Scotland game too.
On the day before the match Gair Henderson of the Evening Times wrote; “Almost every man can be guaranteed to give 100 percent effort for ninety minutes, so there certainly shouldn’t be any ‘couldn’t care less’ attitude on the field.
Scotland lost 2-0 and Mr. Henderson wrote the headline on the 6th “Oh Scotland! – Where was Your Pride? In the match report, the reporter goes through each player individually giving his verdict on whether they failed Scotland or not;
Billy Bremner – Guilty of failing to come up with any inspiration and skill as Captain.
John Greig – Guilty of a number of tackles that were suspect and guilty of allowing his immediate opponent to score the goals that beat Scotland.
Goalkeeper Ernie McGarr – Guilty of failing to stop two shots that should have been saved.
Hugh Curran – Guilty. But with this plea in mitigation – he did not get a chance from the men who were supposed to be helping him from behind.
Francis Burns – A promising boy but obviously on football probation for the next year.
Bobby Murdoch – Not the sparkling Bobby of his recent performances for Celtic. (This would be Murdoch’s last Scotland game).
Charlie Cooke – (Substituted by Colin Stein in the second half) – No darling this time.
Alan Gilzean – His least effective International for a long time.
Eddie Gray – As indifferent as he was brilliant against West Germany.
Ronnie McKinnon and Pat Stanton – Completely cleared of all blame. They fought from start to finish for a Scotland victory but had little support from men on whom they were counting on for assistance.
Further to this he goes on to say about Greig; “On John Greig I can only say from the start to the finish of the match he tried to cut down Redl and failed. Doesn’t sound like a John Greig to me!
It is interesting to note that in Scotland’s next game only Gilzean and McKinnon played.
And so for Francis that was it. He would play 121 League games for Manchester United before going on to play for Southampton for short period and then moving on to play over 300 games for Preston North End.
Happy Birthday Francis and all the best.