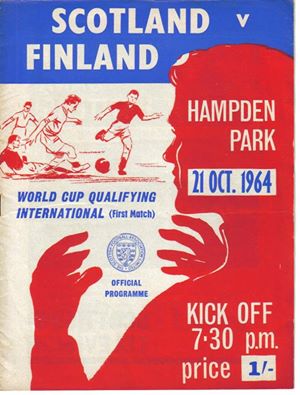 Another programme from our Match Programme Home section commemorating Scotland playing Finland on this day in 1964 in a World Cup Qualifier. This was the first match in the group made up of Italy, Poland, Finland and Scotland.
The Scotland side managed by Ian McColl lined up at Hampden as follows; Campbell Forsyth (Kilmarnock), Alex Hamilton (Dundee), Jim Kennedy (Celtic), John Greig (Rangers), Jackie McGrory (of Kilmarnock winning the first of his three caps), Jim Baxter (Rangers), Jimmy Johnstone (Celtic), David Gibson (Leicester City), Stevie Chalmers (Celtic), Denis Law (Manchester United) and Alex Scott (Everton).
Scotland got their campaign off to the best of starts with Denis Law netting in the second minute. Stevie Chalmers and Gibson would add another two before half time. However, the 54,442 crowd were probably a bit disappointed in the second half as the only goal came from Peltonen of Finland in the 78th minute.
By the time of their next World Cup Qualifier in May 1965, McColl had been replaced by Jock Stein in a caretaker role. Scotland would fail to reach the World Cup due in the main to a loss to Poland at Hampden. One thing of note about the campaign is that the Finland game was the only one that Jimmy Johnstone took part in; with Willie Henderson being the preferred choice by Stein.