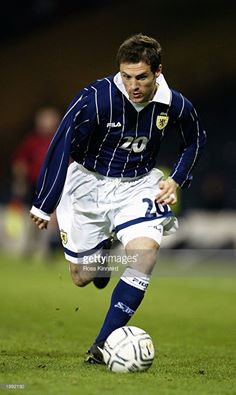 Happy Birthday to Jamie Smith who will turn 36 today. Jamie was capped twice by Berti Vogts in two games that probably sum up friendlies under Vogts. Scotland lost 2-0 to the Republic of Ireland in February, 2003 in front of a crowd of 33, 337 and two months later lost 2-0 to Austria in front of a crowd of 12,189, both at Hampden. In total Jamie played 32 minutes for Scotland, coming of for Neil McCann v ROI in the 64th minute and for the final six minutes v Austria for Paul Devlin. Jamie was capped as a Celtic player but also played for ADO Den Haag, Aberdeen and the Colorado Rapids and features in our Scotland Players Abroad section on the website. He retired through injury in 2014, like coincidentally a lot of players who were capped under Berti.
Happy Birthday Jamie. (Pity they couldn’t get a Scotland strip to fit him)