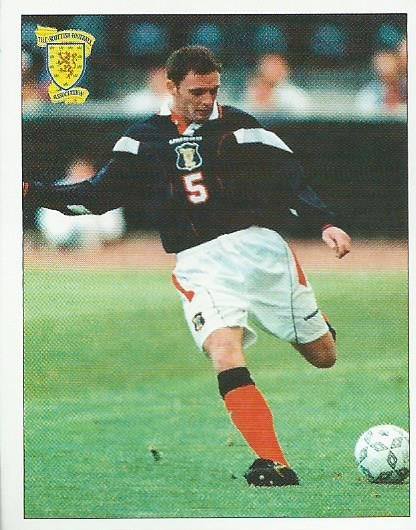 Happy Birthday to Brian McAllister who had a blink and you’ll miss it, three game Scotland career under Craig Brown in 1997. With Scotland playing a World Cup Qualifier in Belarus on June 8th, 1997, Scotland chose to play two warm up games so that the players weren’t too rusty going into the game.
The first was against Wales in late May at Rugby Park. Making their debuts that day were Christian Dailly who was with Derby County at the time and fellow Wimbledon player Neil Sullivan. McAllister had probably been scouted at the same time as Neil, although he had been with Wimbledon since 1989 he had found it hard to break into the team, however the 1996-97 season would see him play 23 games in total. Brian lined up in central defence alongside Dailly. Scotland would lose one nil to a John Hartson goal just after half-time.
He would be given the full game and come a week later he once more lined up next to Dailly in defence in the Ta’Qali Stadium in a friendly v Malta.
A goal from Christian Dailly and a double from Darren Jackson would see Scotland win but perhaps the loss of two goals would see Brian start on the subs bench for the Belarus game. It would be his namesake Gary McAllister who would score from the penalty spot early into the second half that would give Scotland the three points. Brian would come on for the last twelve minutes.
The 1997-’98 season would see Brian fall out of the limelight at Wimbledon and injury would hamper the rest of his career and see him quit in 2000.
However, those three games in the summer of ’97 would see Panini choose a photo of him for their 1997 SFL set and so future collectors of the stickers will be able to look at his photo and think “Who the hell is that?”
Happy 46th Birthday Brian and all the best.