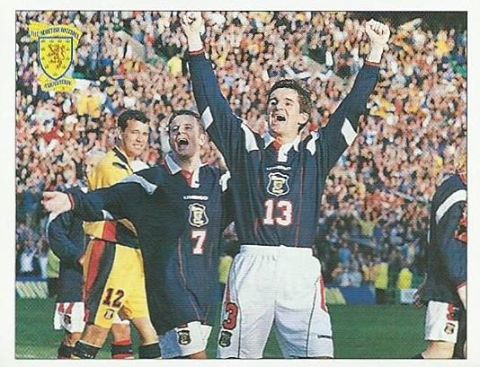 Happy Birthday to Tosh McKinlay who will turn 52 today. Tosh gained 22 caps for Scotland, all coming in his time with Celtic. His first cap came in August 1995 in a Euro Qualifier against Greece at Hampden. It may have been Tosh’s big moment but that night was all about Ally McCoist and a Goalden moment. Ally came on for his first Scotland appearance in over two years and within a minute scored the game’s only goal and one that prove vital in qualifying for Euro ’96.
As for Tosh, he would gain his 5th and 6th caps against England and then Switzerland at the Euros and following this, began to find himself a regular part of the Scotland side not as full back but as a midfield player. He would take part in all of Scotland’s 1998 World Cup Qualifiers and can be seen in the photo enjoying the moment as Scotland have qualified at Parkhead in October ’97 following a 2-0 win over Latvia.
Tosh would have a minor part to play in the World Cup itself, coming on for Christian Dailly for the last five minutes of the Brazilian opener and would gain his final cap as a second half sub during the mauling by Morocco, in what is currently our last match at a major tournament.
Happy Birthday Tosh and all the best.