I used to believe [selfish Glaswegian that I was] that all of Scotland’s home matches should be played at Hampden Park. Eventually I recognised the fairness and pragmatism associated with playing certain matches outwith Glasgow and in truth I’ve always enjoyed my international ‘away days’ at Aberdeen, Edinburgh and Kilmarnock.

I think it’s a real shame however that the city of Dundee does not have a stadium that is currently deemed fit/large enough to host a full international.As such, I’m pleased that the Scotland-Qatar match will go ahead at Easter Road – a venue where I’ve seen Scotland ‘humble’ both Canada and Australia 3-1[October 2002 and August 2012] as well as succumb 1-4 to Sweden [November 2004].

Alas I missed the historic occasion in May 2004 when we defeated Trinidad AND Tobago on the same day! Scotland have also played Finland and Wales at the Leith San Siro as it is sometimes affectionately referred to.Returning to the Scotland v Canada match and bearing in mind this was during the somewhat painful Berti Vogts era I was initially delighted when my loyalty was rewarded with a seat with a restricted view as the attached photograph demonstrates! 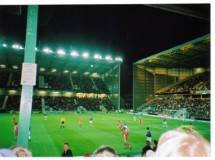