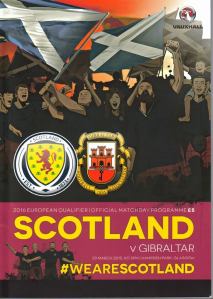 Not being the fastest of readers it took me until Tuesday before I finished digesting the official programme for Sunday’s game against Gibraltar.The £5.00 tome consisting of 84 perfectly bound pages is now well on its way to becoming an Argos catalogue in terms of bulkiness and yet it continues to omit the basic individual player statistics of number of caps won, goals scored/shut outs achieved etc. I still liked it though especially the Question and Answer feature with the legend that is Alan Rough.By comparison, the programme for my first Scotland game [versus Portugal in October 1971] cost five pence and comprised a mere eight pages. From five pence to five pounds, that is an increase of 9900%. The increase in the number of pages represents a rise of ‘only’ 950%. Robert Mugabe would no doubt be impressed by these, admittedly, somewhat misleading statistics.By way of a further comparison, Scotland Epistles only costs £3.00, has a much lower advert ratio and all the articles are produced by real supporters.Of course I just could be a little bit bias in this respect…..